2022… Good riddance! Right from the get-go, the past year was quite difficult. We can frame 2022 as the great unwind; the unwinding of the pandemic era monetary and fiscal stimulus, which totaled in the trillions. At a rapid pace, interest rates skyrocketed, and both equity and fixed-income markets took a dive. This “unwinding” has normalized yields and stock valuations from their artificial, policy-induced levels much faster than anyone could have predicted.

Let’s recap some of the history making market numbers over the previous 12 months:

Even with a strong rebound in asset prices during Q4, the returns for the first three quarters of the year were just too poor to end the year on a very positive note.

We finally had to pay up for the last 15 years of the Fed’s easy money policies. The days of zero percent cash yields, sub-3% mortgages, and government bailouts seems to be over, at least for a while. This radical shift in monetary policy has its benefits; however, cash yields in the 3% – 4% range, bond yields in the 4-6% range and stock valuations at or below historical average valuations all bode well for future returns.

The table to the right offers important perspective on how the capital markets have performed over the short, intermediate and long-term. Over the past 20 years, most stock indices delivered annual returns in the 9% – 10% range, which is consistent with most longer-term periods in history. The past year of poor returns in almost every category has brought the average returns for some asset classes down to very attractive levels, while others remain a bit elevated. 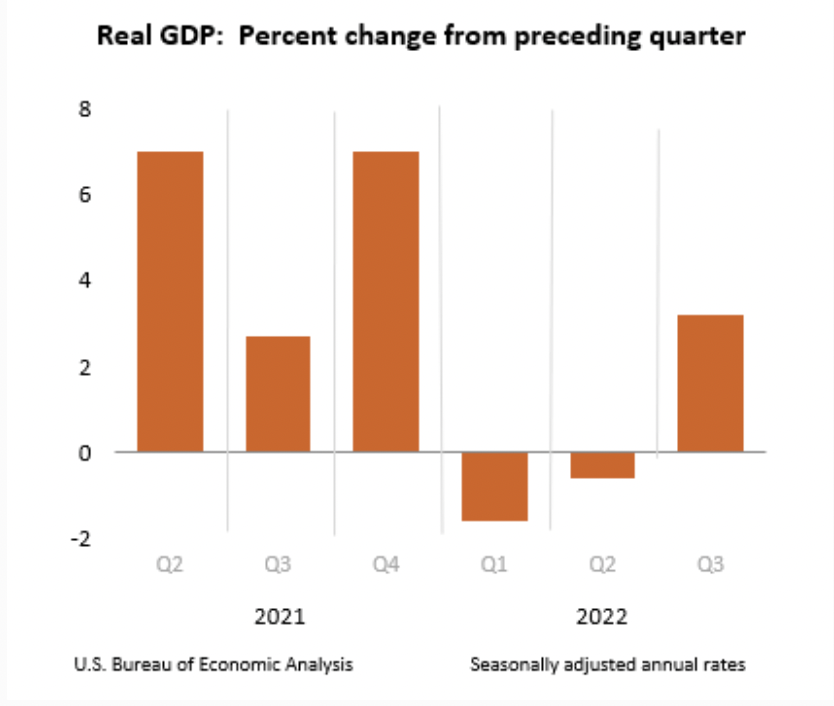 For purposes of this economic update, we’ll focus on the two most important metrics that pertain to today’s economy; GDP and Inflation. There seems to be confusion over the definition of a recession. During the calendar year, we had two consecutive quarters of negative GDP, but it was coupled with all-time low unemployment and strong consumer spending. That doesn’t really sound like a recession, does it? Now, as we approach the next GDP reading on January 26, 2023, the Atlanta Fed’s GDPNow model shows the forecast for Q4, 2022 at +3.8%. Under the surface, parts of the economy are slowly weakening, the housing market and the manufacturing sector have been contracting over the past several months. Additionally, there have been layoffs in certain sectors of the job market, primarily technology; that said, there are still so many job openings that it would be difficult to imagine the unemployment rate approaching anywhere near 5% in the near term.

The Fed has been raising the funds rate aggressively over the past few quarters to fight off the highest inflation since the early 1980’s. The current backdrop of high inflation and high interest rates has slowly begun to negatively impact the consumer and corporate earnings, which will most likely translate into negative economic growth.

Based on weakening economic metrics and an inverted yield curve, we believe that the most likely scenario is a mild recession sometime in the next year or so. This would not be a surprise to anyone and the markets have most likely already priced this in. 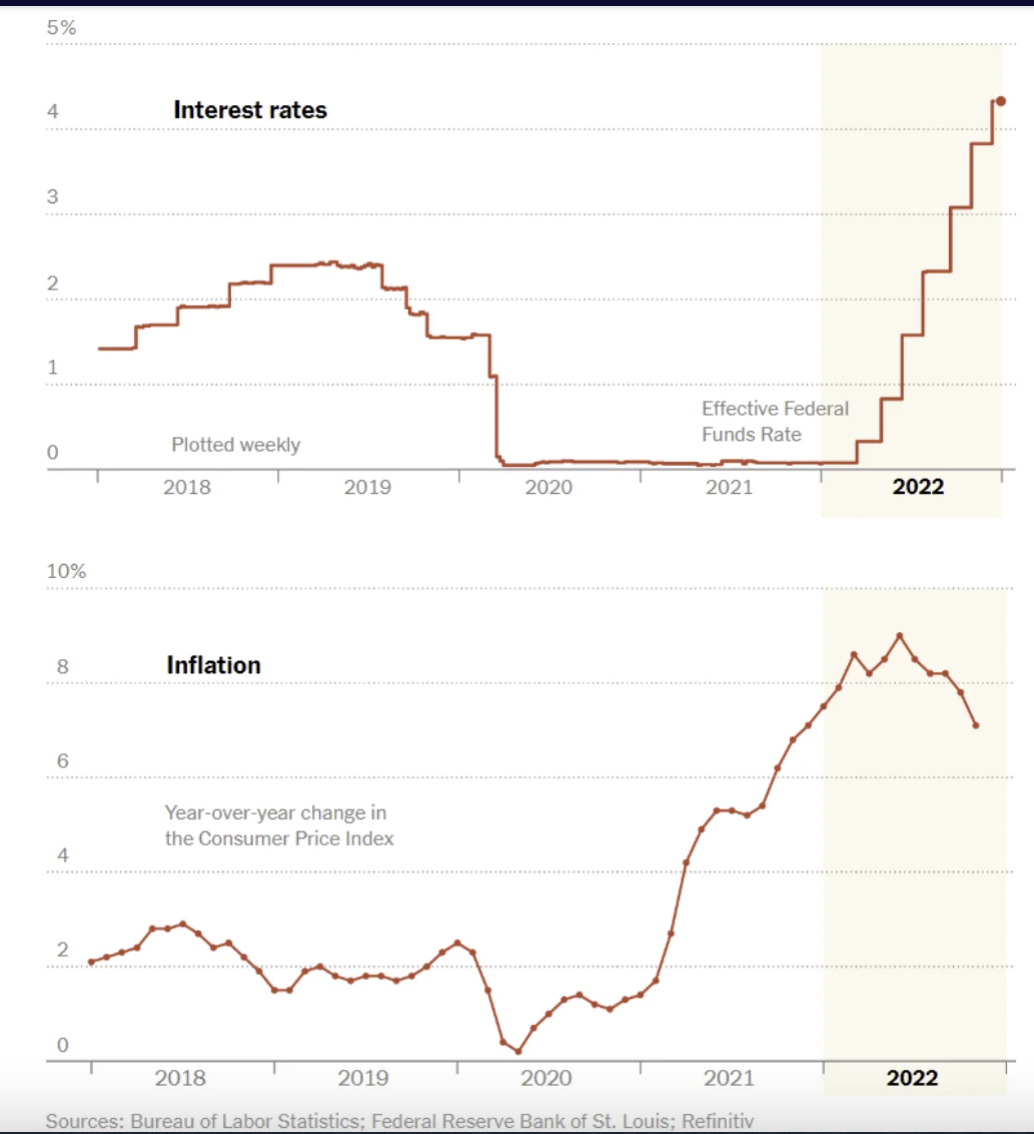 As inflation continues to ease from its June peak, there is a small probability that the Fed will be able to engineer a soft landing, but it has a lousy track record of doing so. That said, recessions are a normal part of the economic cycle (about one every five years), and shallow recessions aren’t really something long-term investors need to lose too much sleep over. 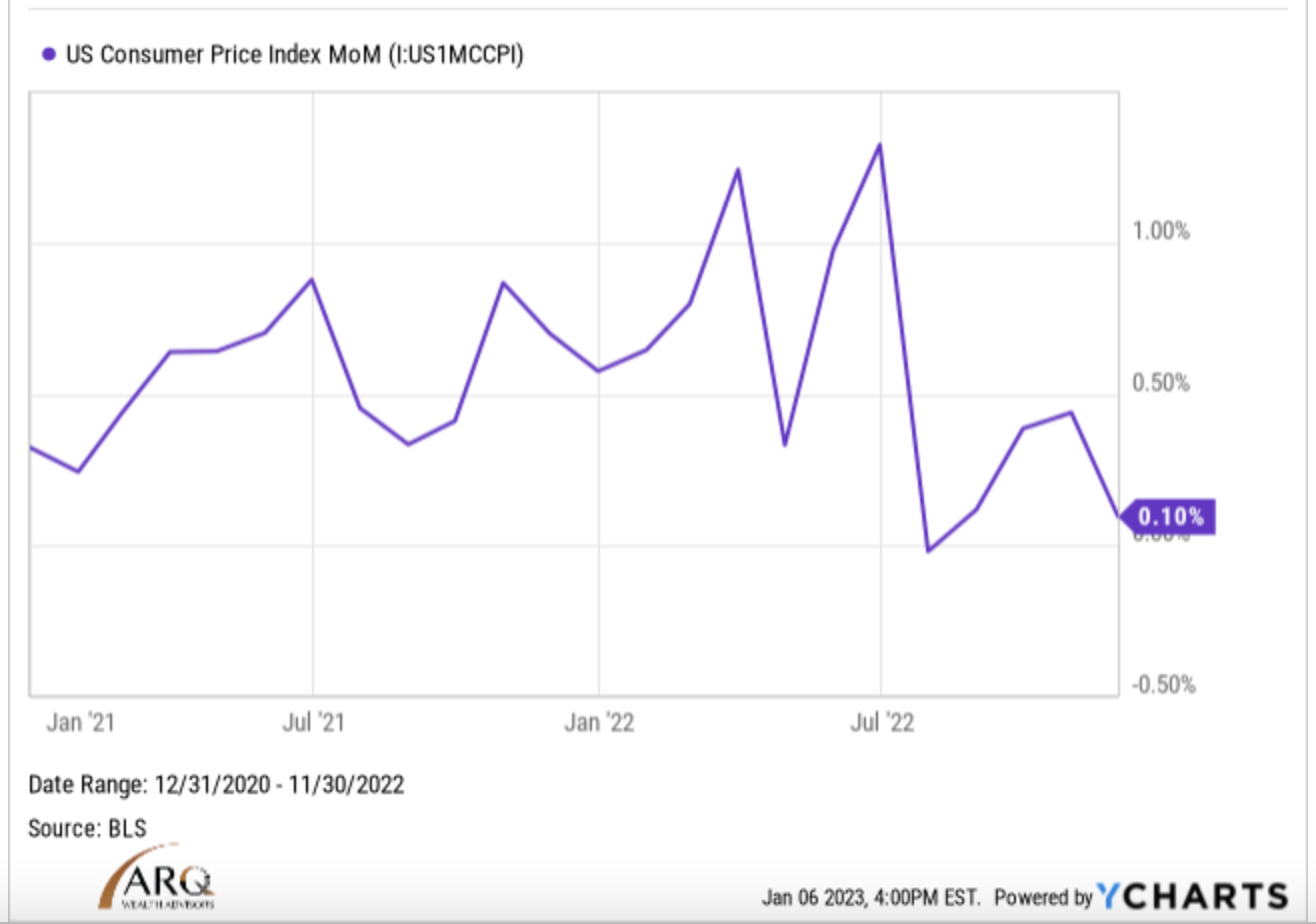 If wage inflation wasn’t as high as it’s been over the past year, the current inflationary environment would be a serious problem. The state of Arizona just published its 2023 minimum wage: $13.85. Driving around Scottsdale, I recently saw a “for hire” sign at Taco Bell for $17-$19/hour! The most complete picture of inflation is Headline CPI. At this point, it’s safe to say that inflation peaked in June 2022 and has been steadily declining. The latest reading was 7.1% for the month of November. Goods inflation has significantly dropped as supply chains are mostly repaired and demand has waned. Services inflation, which is mostly made up of housing/rent has a lag effect and has been the stickier part of the CPI number. Based on the last few months of CPI releases, it’s likely that inflation will continue to drop meaningfully over the next few months.

Before we get into the details of 2022’s market downturn, here are some valuable data points for perspective:

2022 may have felt worse than what we’ve been accustomed to in recent market downturns due to the length of time that has transpired. Since the 2008-2009 Great Financial Crisis, all of the market corrections and bear markets we’ve had have been quick drops and quick rebounds in a V-shaped recovery.

From a behavioral finance standpoint, some investors tend to get very negative, depressed and even throw in the towel on investing when downturns last for extended periods. In fact, studies show that nearly 2/3’s of investors admit to making emotional financial decisions during times of uncertainty. As wealth advisors, we strive to keep our clients invested over the long-term so they can achieve their goals. Underweighting expensive investments and overweighting more attractively priced investments helps to reduce losses during periods of turmoil. Case in point, we’ve been saying that many mega-cap tech stocks have been dangerously expensive for a few years. We were a bit early on the call, but by underweighting this area of the market, our clients were protected against some really devastating returns in 2022. For the full year, the equity return for all holdings in our client portfolios was -14.81% on a weighted basis.

The market reached its all-time high level on January 3rd and immediately began losing ground. There were a few impressive bear market rallies throughout the year, but the confluence of aggressive rate hikes, the impact of inflation, along with fear and sentiment were simply too much pressure on equity prices. Noteworthy is the underperformance of foreign markets in Q3 due to the war in Ukraine and China’s zero-Covid policies and then the impressive about-face of these markets in Q4 as the U.S. dollar lost significant strength. We continue to be positive on foreign equity exposure primarily based on much more attractive valuations compared to U.S. stocks.

Another important market dynamic worth discussing is the tremendous outperformance of value stocks versus growth stocks in 2022. We’ve been communicating about this opportunity for about 2 years and slowly migrating stock positions to reflect our conviction. Increasing exposure to the utilities, industrial, financial, and energy sectors while reducing the technology, communications services, and consumer discretionary areas of the market was one of the more successful tactical shifts we’ve made in the last few years. As we head into 2023, we are overweighted in the areas of the global markets that are cheaper, have higher earnings growth, and are more profitable.

2022 was the worst year of all time for the U.S. Aggregate Bond Index, -13.01%. The index is made up of a mix of high quality bonds: U.S. Treasuries, government backed mortgage bonds and corporate bonds. As rates experienced a parabolic rise, bond prices plummeted. The longer the duration of bonds, the greater the price movement, so we’ve been erring on the side of short to intermediate-term exposure to limit volatility. We also moved significant assets out of traditional bonds over the past few years in favor of low volatility non-traditional, alternative assets. As a result, the fixed income/non-traditional return for all holdings in client portfolios was -8.15% on a weighted basis in 2022, approximately 5% better than the benchmark.

With the historic losses in the bond market comes opportunity. Lower prices and higher yields are today’s backdrop, the ideal set-up for bond returns on a forward looking basis. It’s been over a decade that bonds looked this attractive. Another dynamic to consider is if we go into a recession, yields will come down, accelerating the returns of bonds, and acting more as a traditional hedge for portfolios. 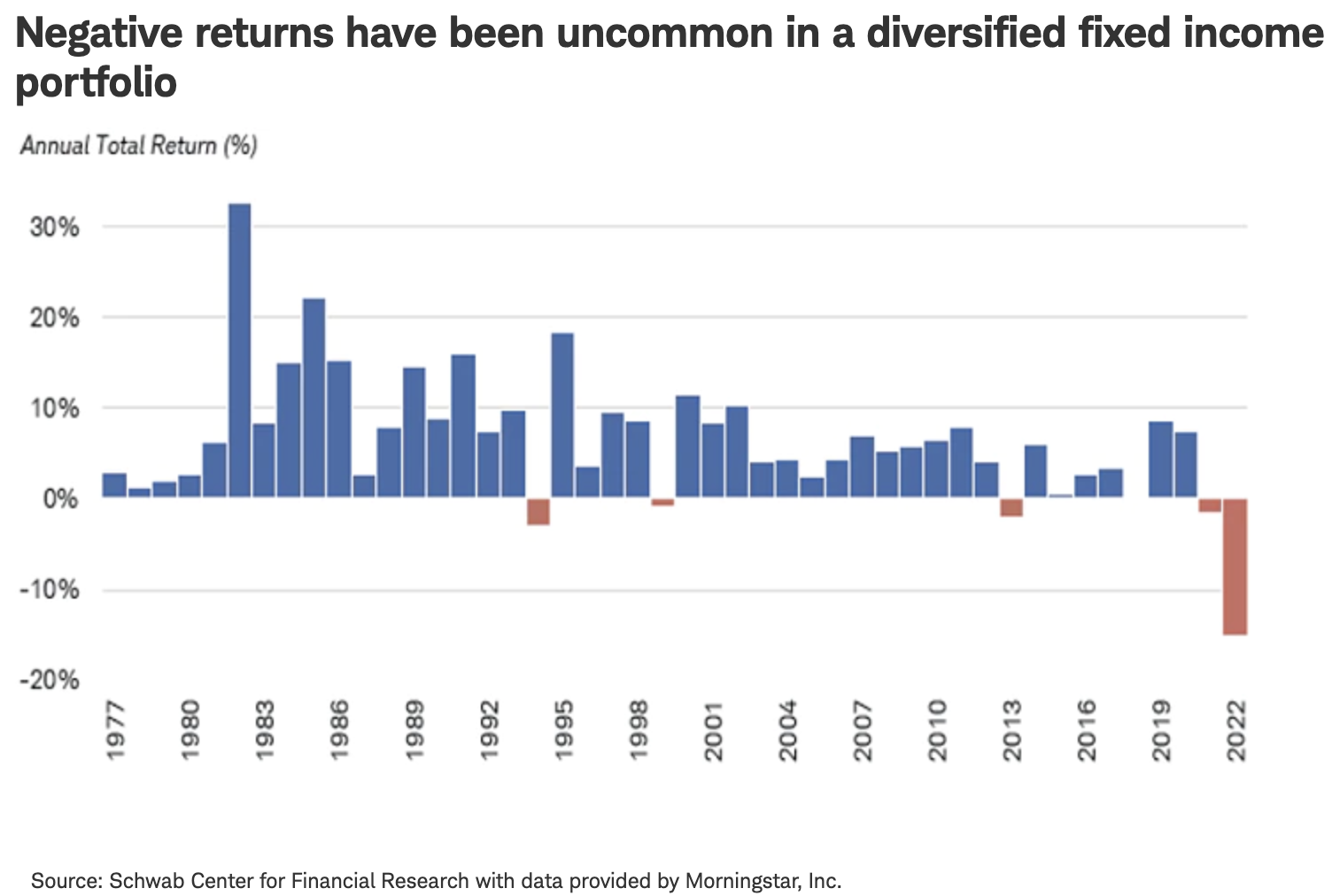 2023 will surely bring more volatility and uncertainty, but there is a lot to be positive about.  Inflation looks to be in a serious decline from its highest levels, the Fed is most likely very close to reaching its terminal rate, there are plenty of attractive opportunities in both the stock and bond markets, and there is divided Congress which typically bodes well for the stock market. It’s not unprecedented, but it’s rare for the stock market to be down 2 years in a row.  Here’s to a healthy, happy, and prosperous 2023!