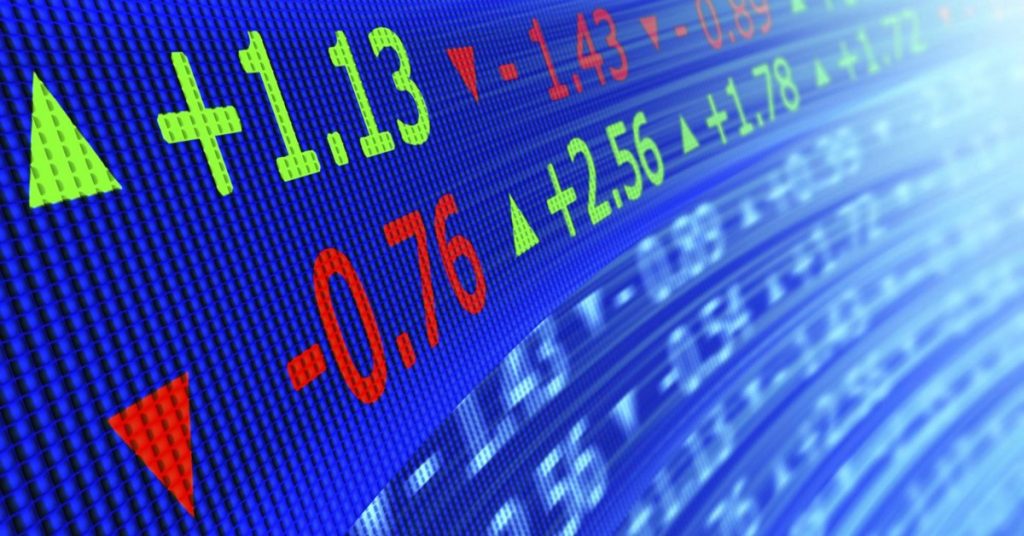 2020 taught us a lot; A lot about ourselves and our emotions, a lot about how important health and wellness is, and a lot about what is truly important in life. The coronavirus pandemic is far from over, but I think it is safe to assume that we are in the back end of this crisis. Not only did we have to cope with the anxiety of lockdowns, sheltering in place, working from home, wearing masks, searching for toilet paper and other staples, but some of us had to deal with loss of income, contracting the disease itself, and having to deal with people we care about getting sick or even passing away. A difficult year indeed. In addition to the extreme health and human element, 2020 was an extreme year for the economy and the capital markets. In fact, it was one of the most extreme years on record. The 2020 pandemic recession will forever be associated with one of the deepest and shortest recessions in American history.

The four week waterfall crash of the stock market is in the books as the fastest bear market ever. Markets priced in Armageddon; a precipitous drop in corporate earnings and a collapse in credit markets. This felt like a redux of the Great Recession (2007-2009). The markets needed an intervention and fast. Unlike the various stimulus packages implemented during the Great Recession that took many months to get traction, The Fed and Treasury department acted within weeks and provided the necessary shot in the arm by way of 0% interest rates, stimulus checks, lending facilities and a whatever it takes approach. Markets responded quickly and began to climb out of the deep hole caused by the sheer panic and uncertainty of the pandemic. In fact, the market was so resilient, that it turned into the fastest bull market ever and fully recovered all of its losses by the 4th quarter. It is important to note that bear markets during recessions don’t typically recover for a couple of years, so the speed of this rebound was remarkable. Also noteworthy is that the highly anticipated, contentious Presidential election turned out to be a non-event as it relates to market volatility.

The matrix below offers valuable perspective on how the capital markets have performed over the short, intermediate and long-term. Notice that over the long run, all but the commodity and energy indexes turned in solid returns, while cash didn’t even keep up with inflation. Despite two major bear markets/recessions (2007 –2009 Great Recession and this year’s Covid-19 pandemic market crash/recession) within the 15 year time frame, both fixed income and equity  markets  delivered impressive outcomes.

Gross Domestic Product (GDP) is the primary and most important measure of economic output. Historically, the U.S. economy has delivered approximately 3% growth on an annualized basis, and in more recent years closer to 2.5%.  When the economy contracts and economic output shrinks deep enough or long enough, it is classified as a recession. Recessions tend to occur every 4 or 5 years and they are part of the normal economic cycle. What transpired in March of 2020 was far from your garden variety recession. Economies around the globe essentially shut down in an attempt to slow the spread of the coronavirus. This was a very deep, government imposed recession. While some parts of the economy have been decimated, others have thrived. Although, we are officially out of recession, the areas that were hit the hardest will take some time to repair. You will notice from the chart to the left that even though there has been a “v-shaped” recovery so far, total economic output is still far from trend. We expect the trajectory of the line on the far right to begin flattening out, indicating a more normal economy going forward.

The travel and hospitality industries in particular are still in bad shape and account for a large percentage of the unemployed. Technology, online retailers, and the communication services sectors have been the beneficiaries of this “stay at home” economy. It will most likely take a few more years for the unemployment rate to get back down to the 4% range and for the economy to fully reopen. Additionally, the U.S. will need further fiscal stimulus to bridge the gap between the pandemic economy and post-pandemic economy. The stimulus will most likely come in the form of extended unemployment benefits, stimulus checks, low/no interest loans. On the monetary policy side of things, the Fed will most likely not raise rates for at least a few years. Ultra-low yields encourage both lending and borrowing, and is the typical Fed playbook for stimulating growth during a recession. 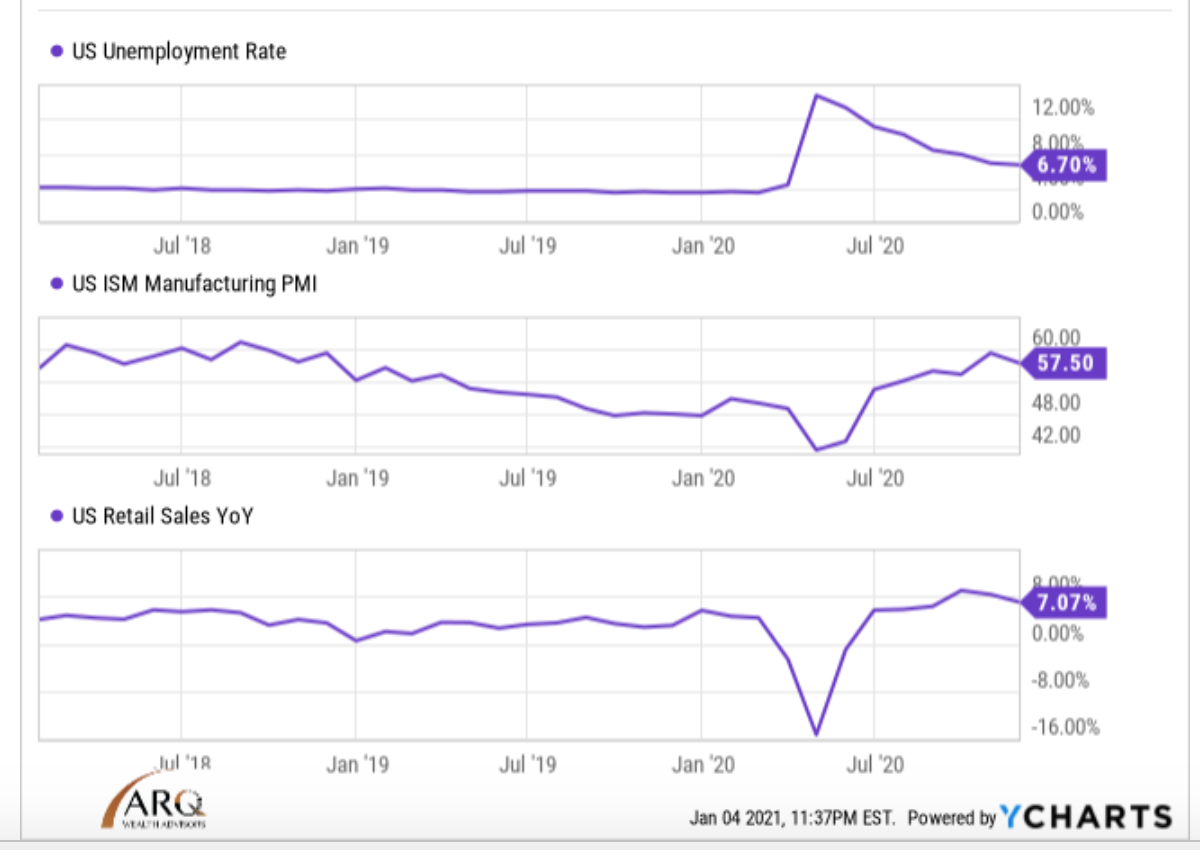 Just when you thought you had seen it all, the 2020 equity market is now the standard-bearer for volatility and uncertainty.  What started out as a smooth and steady pattern of returns, quickly transitioned into a violent collapse. Then, just when fear and despair began to set in for investors, the market did an about-face and climbed to new all-time highs in short order. Foreign equity markets followed a very similar return pattern to the U.S market. Lessons can definitely be learned here. For starters: panic is not an investment strategy, timing the market is a fool’s errand, don’t base your investment decisions on politics, you get the point.

There were two pervasive trends in the equity markets in 2020. The first being the incredible amount of volatility. Historically, the VIX, otherwise known as the fear index trades at about the 18 level. When the level is in the low teens, it indicates complacency and confidence. Oppositely, when it trades in the high 20’s, it implies fear and uncertainty. Shockingly, the VIX hit an all-time record high of 82.7 in March. This exceeded the previous high water mark of 80.1 set during the Great Recession. To put this in perspective, a VIX of 80+ implies a daily move in the market of 5%. At a Dow Jones level of 30,000, that would be a daily move of 1500 points! 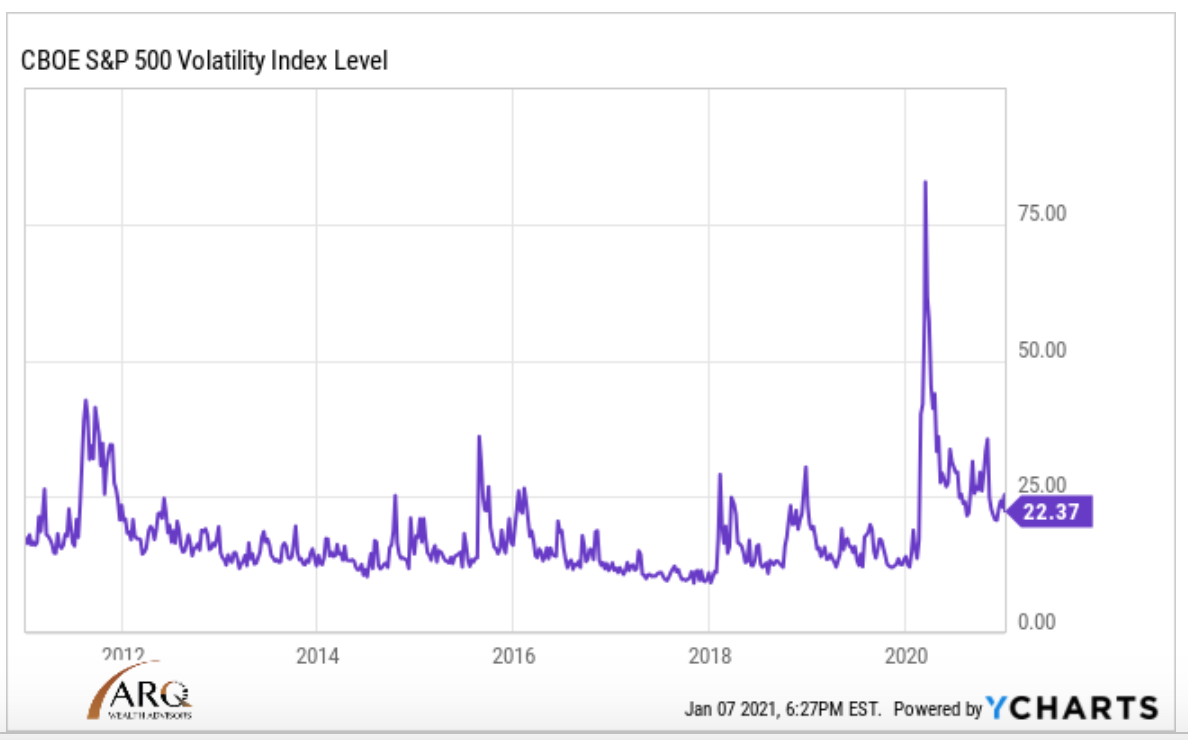 The second major theme for 2020 was the wide disparity between growth sectors versus value sectors. Technology and communications services were able to overcome the recession with ease as people relied on companies like Amazon, Microsoft, and Zoom to get their groceries and conduct business from home. Some of the value sectors such as energy, financials and real estate weren’t as fortunate. That said, the winners from 2020 are now sitting at valuations that almost don’t make sense, while the laggards are much more attractive and offer better upside as they are more economically sensitive and have begun to price in a full reopening of the economy and an end to the pandemic. Accordingly, we have been slowly tilting our strategies to slightly overweight these cheaper, more attractive sectors over the past several months in order to take advantage of what we perceive as a great opportunity. At the same time, we have slightly reduced exposure to the aforementioned expensive, momentum areas of the market. Since the S&P 500 is a cap-weighted index, it is now heavily comprised of these stocks and from a valuation standpoint is quite expensive relative to historical norms. In contrast, the equal weighted version of the index is  more diversified and therefore has a more attractive valuation.

Two other areas that deserve honorable  mention in 2020 are emerging market stocks and U.S. small-mid cap stocks. These areas have been lagging U.S. mega cap stocks in recent years, but during the second half of 2020 saw incredible appreciation. Emerging markets have benefited from a weakening dollar and Asian markets in particular have handled the pandemic crisis better than the U.S. and Europe. Small-mid cap domestic equites have benefited from a recent rotation into the more cyclical sectors such as energy and financials.

Similar to the equity markets, the fixed income markets experienced extreme turmoil in 2020. As panic set in during the early innings of the pandemic, investors knee-jerked it and sold any asset that wasn’t Treasuries. The fierce selling caused the value of most fixed income assets to plummet alongside stocks. This was the exact same playbook we saw in the Great Recession. Once the U.S. government stepped in and guaranteed that most of these debt issues would be money good, the rebound was swift.

With strong demand for the safe-haven of Treasury bonds, rates plummeted to all time low levels. On a closing basis, the benchmark 10-year yield bottomed at 0.54% in March. Fortunately, this was short lived and yields have begun to slowly normalize, closing out the year in the 1% range. Another very important dynamic to point out is that the 10/2 year yield spread has been widening since the market bottomed. This is a bellwether signal that the economy is improving. Based on the Fed telegraphing that they plan to keep the short-term rates pegged at 0% for a few years, we would expect the 10-year rate to grind higher as the economy fully reopens. 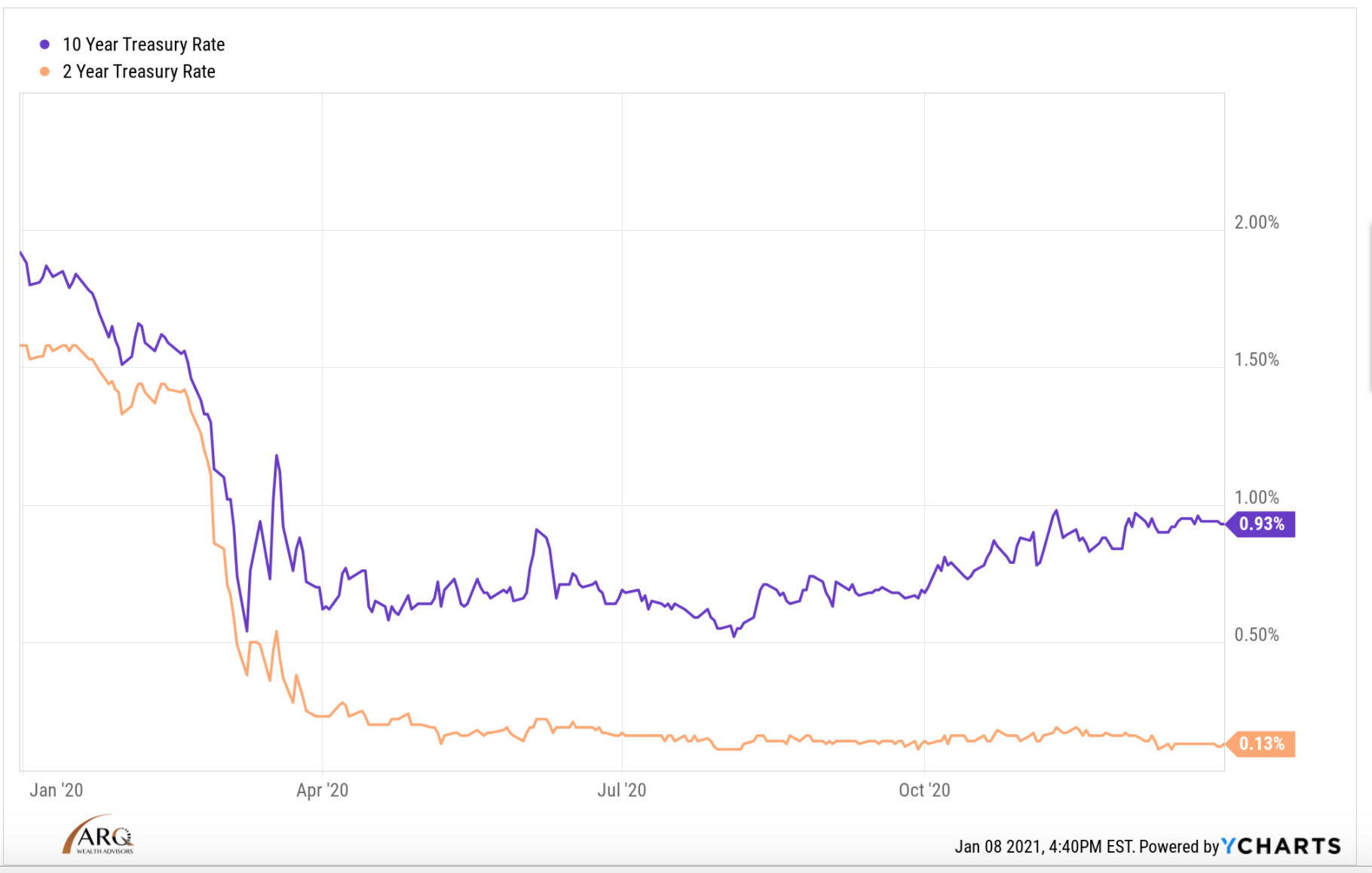 Our portfolio strategies are well positioned to sustain higher interest rates. In fact, the non-traditional investment holdings within our methodology framework have a history of thriving in rising rate environments with similar volatility metrics to bonds.

As we transition into 2021, we are all hoping for a healthier, safer and less dramatic year. With Covid-19 vaccines being deployed and so many people having contracted the disease already, we are most likely going to see a steep fall off in cases in the next few months as we get closer to a level of herd immunity. In the meantime here are the possible headwinds we see for the markets: highly valued equity markets, possibility of the new administration’s policy agenda spooking the markets, and higher than expected inflation. Here are the tailwinds: Strong economic data and corporate earnings growth, the possibility of compromised legislation/fiscal package, and excessive liquidity in the system; Consumer credit card debt levels are way down, personal savings is way up and there is still a record amount of cash in money market assets. When added together, this liquidity could be rocket fuel for asset prices like housing and stocks.