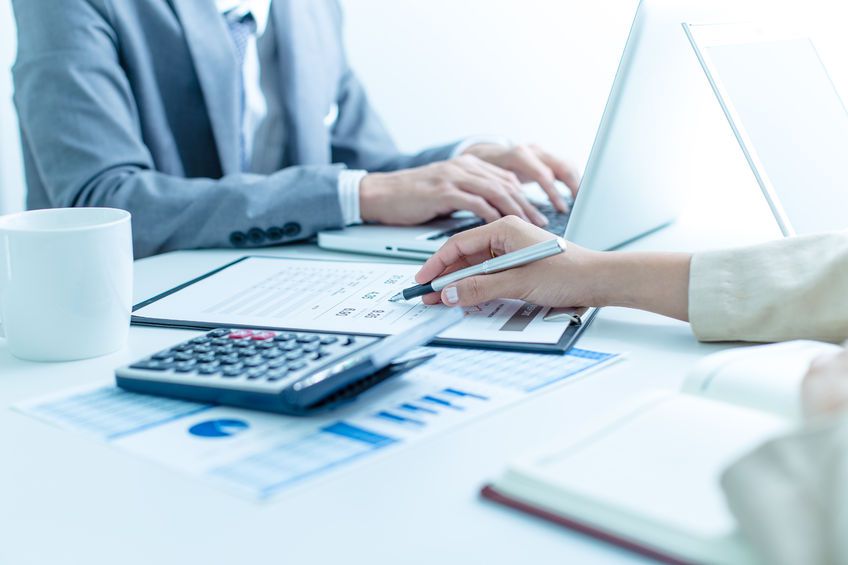 The third quarter of 2021 delivered weak returns for the majority of global equities. This marks the first negative quarter for stocks since the spring of 2020. The resurgence of COVID by way of the Delta variant along with inflationary pressures and supply chain disruptions are the primary culprits for the recent weakness.

Uncertainty around the Biden tax plan/stimulus package, the debt ceiling debacle as well as normal seasonal market weakness have added some fuel to the fire; Since 1950, September has been the weakest month of the year, while November and December have been the strongest. Here is how the market’s returns stack up on a monthly basis: 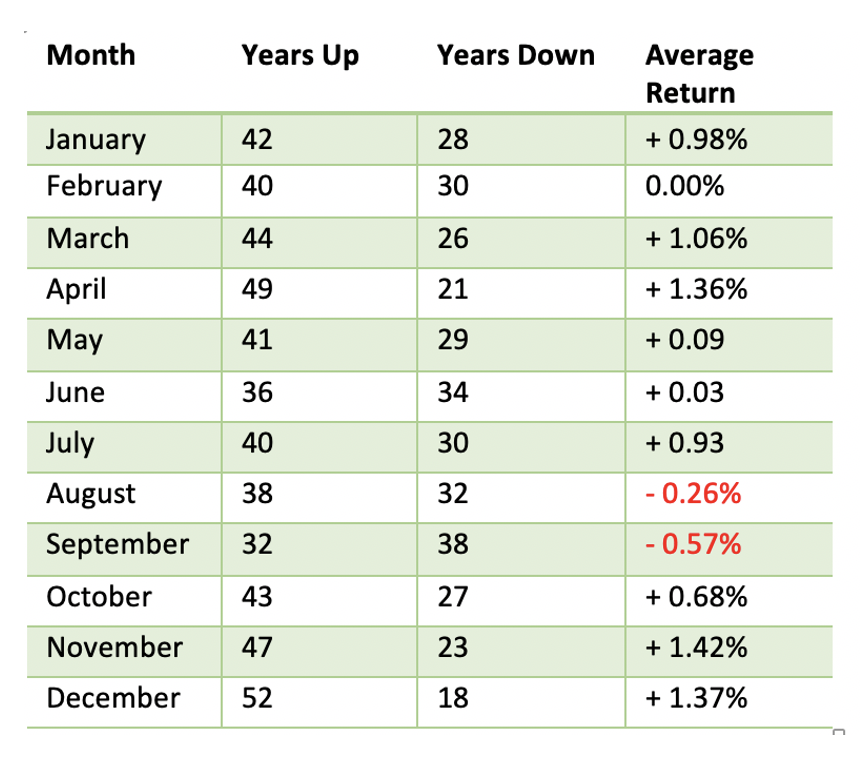 Both the economy and the capital markets have experienced an incredible rebound from the depths of the pandemic crisis. Now, as the “v-shaped” recovery has come to fruition, the Fed and the Treasury will soon begin pulling back its stimulus measures; markets and economies will need to stand on their own two feet. Essentially, things are normalizing and that’s a good thing. The Fed has been telegraphing  its plans to pull back on its bond purchasing program over the next year, methodically unwinding the aggressive stimulus that was implemented at the start of the pandemic. Once the asset purchases are concluded, we would anticipate rate hikes to commence shortly after. This is the same playbook that was effectively implemented after the Great Financial Crisis in 2009. 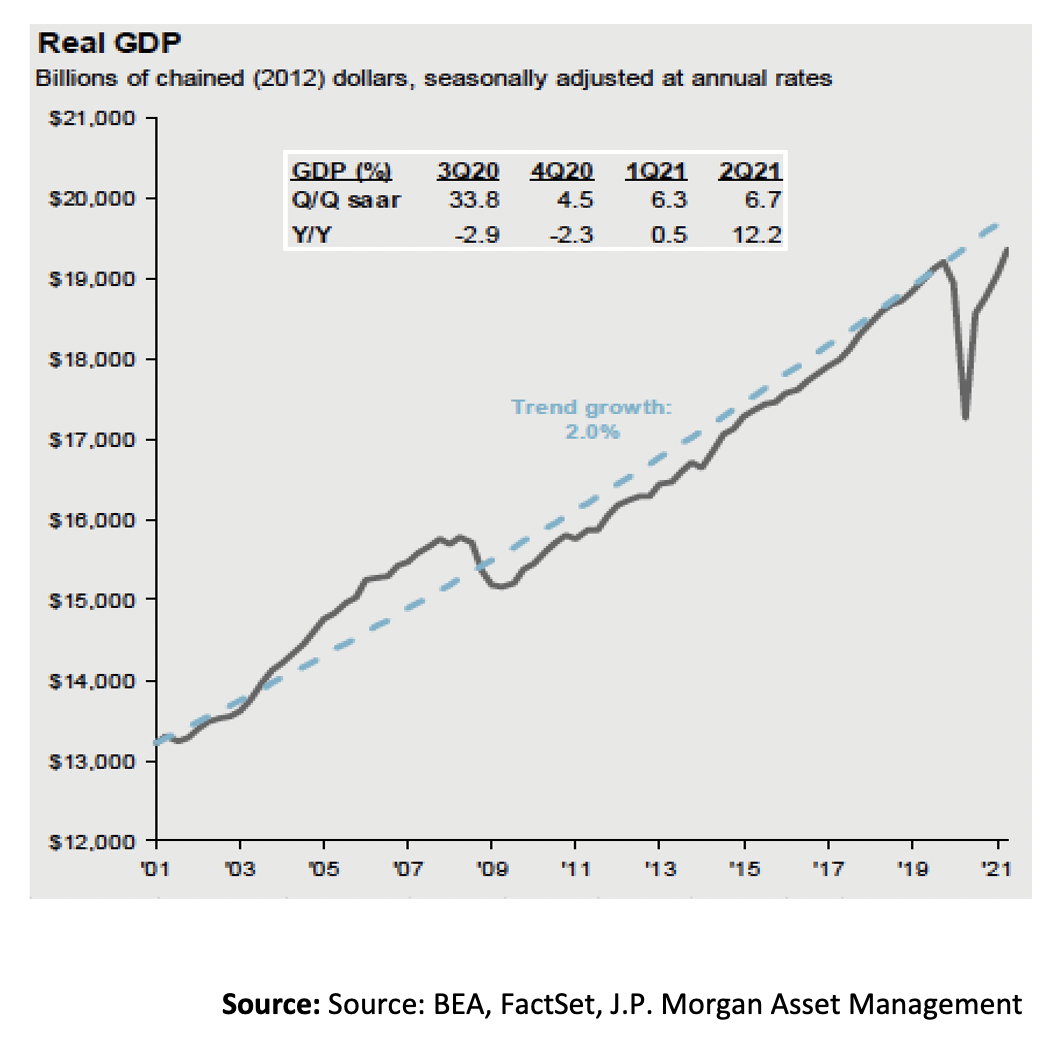 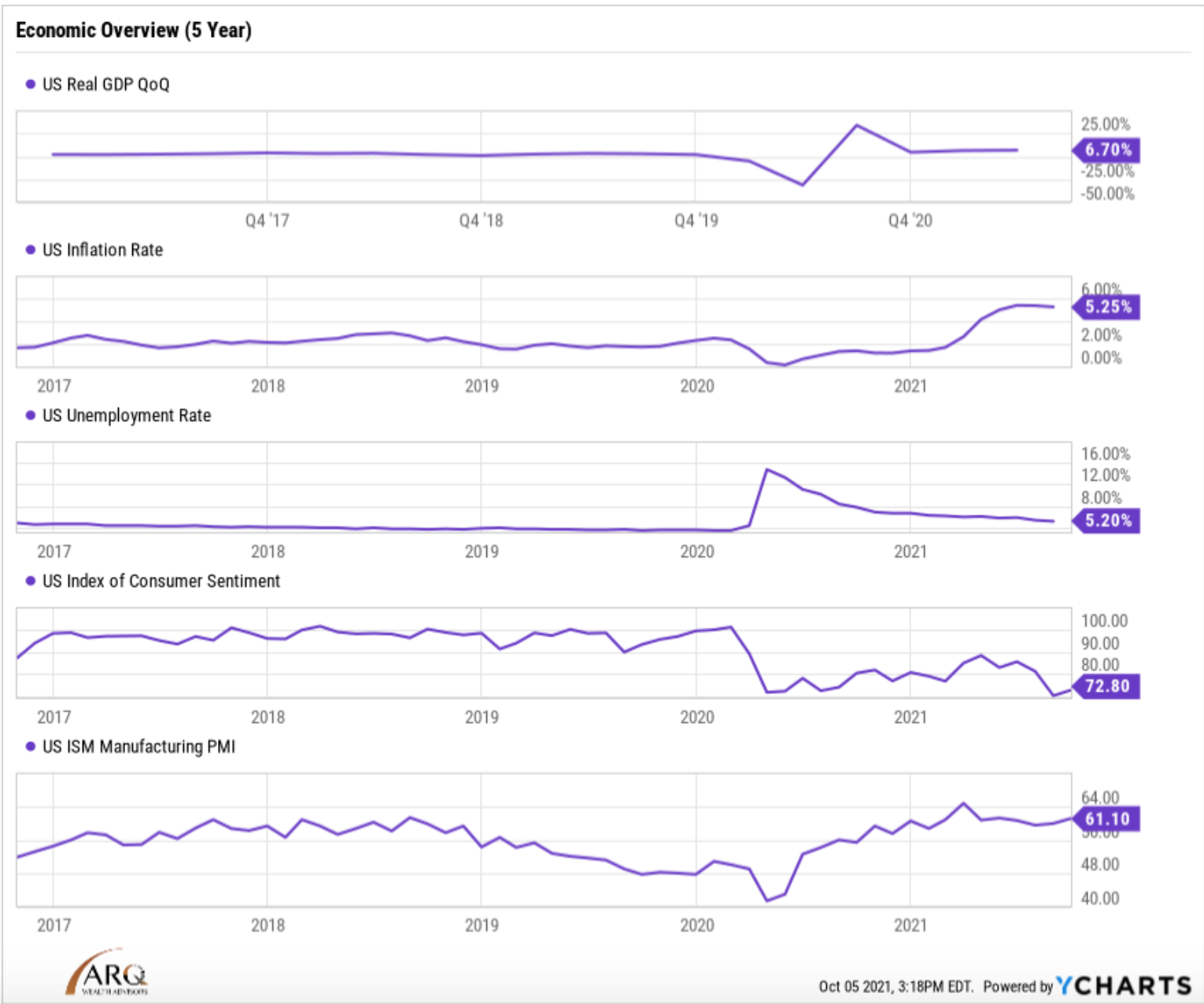 Due to the surge in the Delta variant and supply chain disruptions, the impressive surge in U.S. GDP has taken a breather. By most accounts, Q3’s GDP forecast now sits in the low single digits, a sizeable decline from the 6.7% growth from Q2. The good news is that there should be a rebound back to above trend growth in Q4 as Delta fizzles out and supply chain issues improve.

Noteworthy, is the precipitous decline in the  unemployment rate. This number should continue to trend lower as extended unemployment benefits are reduced this fall. Manufacturing as a percentage of total GDP is approximately 11%, and output is close to multi-decade highs. Consumer sentiment tumbled when COVID first reared its head and then rebounded for several months as optimism around effective vaccines and learning how to reopen the economy during a pandemic became the norm. In recent months, there has been a fall-off in consumer sentiment due to the Delta surge. A rebound in this very important metric is crucial, as consumer spending accounts for 69% of GDP.

Another important metric to consider is inflation, which we believe will decline from current levels, but not down to the 1.5% – 2.0% that we’ve become accustomed to. All of the money creation over the past 18 months should translate to an inflation rate that runs above longer-term trends for years to come.

Finally, housing has been incredibly strong during the pandemic as historically low mortgage rates and excess liquidity have increased demand and reduced supply pushing prices up to all time high levels. Rising home prices create a “wealth effect,” which is a behavioral economic theory that implies people spend more as the value of their assets rise.

Although equities were relatively weak over the past three months, we should not discount their strong year-to-date performance. You can see on the chart to the right that most equity benchmarks have been essentially treading water for several months. Small cap stocks actually peaked in March while foreign stocks have been the laggard thus far this year due to recent strength in the U.S. dollar, parabolic COVID spread in some large emerging markets, and China’s crackdown on technology companies, wiping off billions in market value.

It is very important to highlight the performance and valuations of growth stocks versus value stocks. Here are two charts that compare the same benchmarks for the same rolling one year. Noteworthy is value’s slight outperformance over the 12 month  period versus growth stocks, however the outperformance was all front-end loaded. The last six months saw just the opposite; growth handily outperforming value stocks. The reason for this dynamic is value sectors are more economically sensitive. So, if economic activity is normalizing, meaning the pandemic will no longer hinder activity, value should outperform, while shutdowns and staying at home have favored growth stocks. It is our contention that value stocks (financials, energy, materials, industrials) are quite attractive with a forward P/E ratio of only 15.68x whereas growth stocks (technology, communication services, consumer discretionary) are trading at a forward P/E ratio of 33.10x.

The bottom line is that at present, there is one of the largest  dispersions between cheap stocks and expensive stocks on record. While we have exposure to stocks like Apple, Amazon and Google in client portfolios, we have made a concerted effort to limit exposure to the more expensive segments of the market and have begun to overweight areas with more attractive valuations. The reason for this is two-fold; value stocks have the opportunity to outperform on the upside and offer more downside protection.

Bonds and other low volatility investments are included in a well-diversified portfolio for a variety of reasons: income, stability, equity hedge, and total return. Historically, investors have experienced returns in the 4-5% range in these asset classes. This year, we’ve already seen two quarters of fairly significant increases to the benchmark 10-year Treasury rate (both Q1 and Q3). When rates go up, bond values drop, so returns in 2021 have been meager. We include “non-traditional” investments in client portfolios in order to provide stability and diversification without the interest rate sensitivity. These investments are fairly sophisticated and include strategies such as market neutral income, post-announcement merger arbitrage and absolute return income. As a firm, our holdings in the fixed/non-traditional space have outperformed the benchmark U.S. Aggregate bond index by approximately 2.50% in 2021 due to our defensive positioning as it relates to rising interest rates.

Heading into the final three months of 2021, we expect continued volatility in October, which is historically a choppy month. It is no surprise that the administration is attempting to rollout large scale infrastructure plans coupled with tax increases. After all, this is what Joe Biden ran his campaign on. The real question is how much if anything will pass and what will be the resulting impact to the tax code. The market doesn’t like uncertainty, so once there is something concrete around these issues, volatility should subside. As we mentioned in our last commentary, stocks were long overdue for a correction and this one is no surprise, so we rebalanced client portfolios in August and September, selling high and buying low. As Tony Dwyer from Canaccord Genuity says “corrections are only natural, normal and healthy until you’re in one.” We will capitalize on any further weakness in the market using these pullbacks to deploy capital and rebalance portfolios.