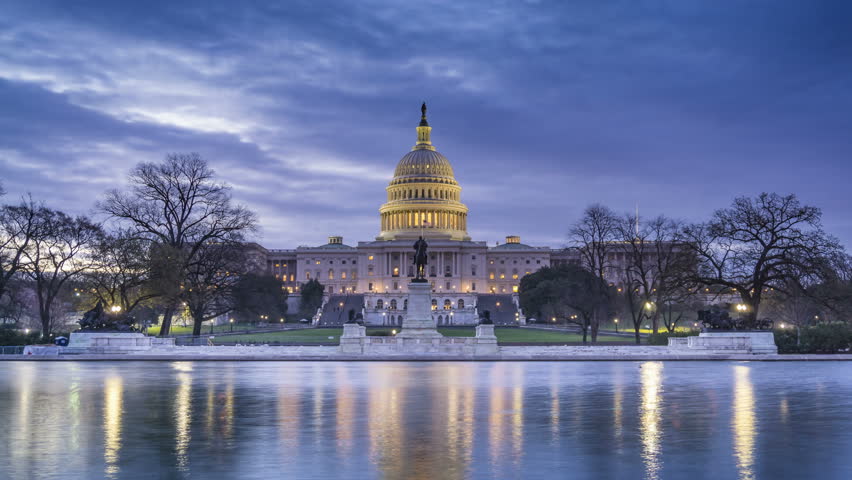 The stock market sees green, not red, and not blue. The upcoming presidential election is so hyped and the country’s political future seems uncertain, but the market may be divorced from it all. It appears that the equity market has been relying more heavily on both monetary and fiscal policy than on who is the next president of the United States. Do you really think Amazon’s earnings will be greatly affected whether Donald Trump or Joe Biden is our next president? Do you think that Apple will sell less iPhones? Attempting to accurately forecast the market between now and election day will most likely result in a counterproductive outcome. Speculating on major events like elections or pandemics have proved to be futile over the years. Even if you get lucky and make the right move once, it is almost impossible to make the right move the next time. 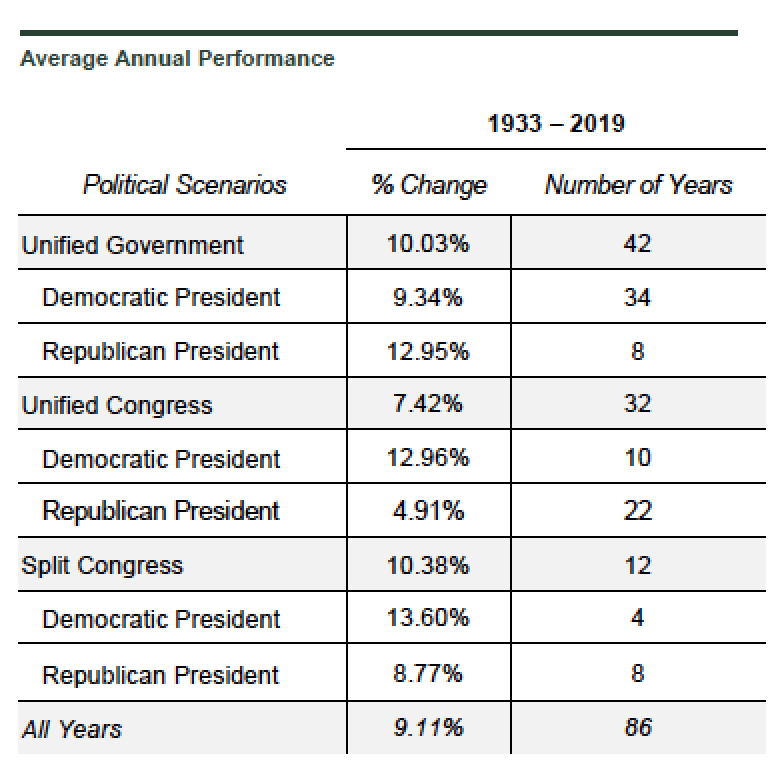 Historically, maintaining a diversified portfolio during times of uncertainty is the winning formula. Interestingly, since the Great Depression era, stock market performance has been best under a Democrat president with a split Congress and worst under a Republican president with a unified Congress. Overall, what you can take away from the chart to the left is that making money in the market is most correlated with time in the market. Obviously, if Trump were to get re-elected, you can expect more of the same policies (low corporate taxes, low regulation, aggressive trade policy). If Biden were to win the election, and as of the date of this commentary, he leads Trump in the polls, you can expect higher taxes, increased regulation, and possibly an aggressive job creating infrastructure bill.

Indeed there is significant uncertainty heading into this election around how voting will work, how soon a winner will emerge, and if the result will be contested. Well, we will soon find out. Focus on the things you can control and not what is out of your hands. You will be a more successful investor. Do you think Warren Buffet is panicking over an election result? I would bet he is not.

The July through September period of 2020 was a continuation of strong equity market returns and a huge economic rebound. By this time, we are clearly out of the COVID 19 recession and as we will see in a few weeks, one of the best recoveries in economic activity ever.

That said, we are not quite out of the woods yet. Shutting down the global economy for a few months will take years to repair, but understand that Fed support, fiscal programs, and a global synchronized economic recovery has provided an incredible backdrop for the capital markets. 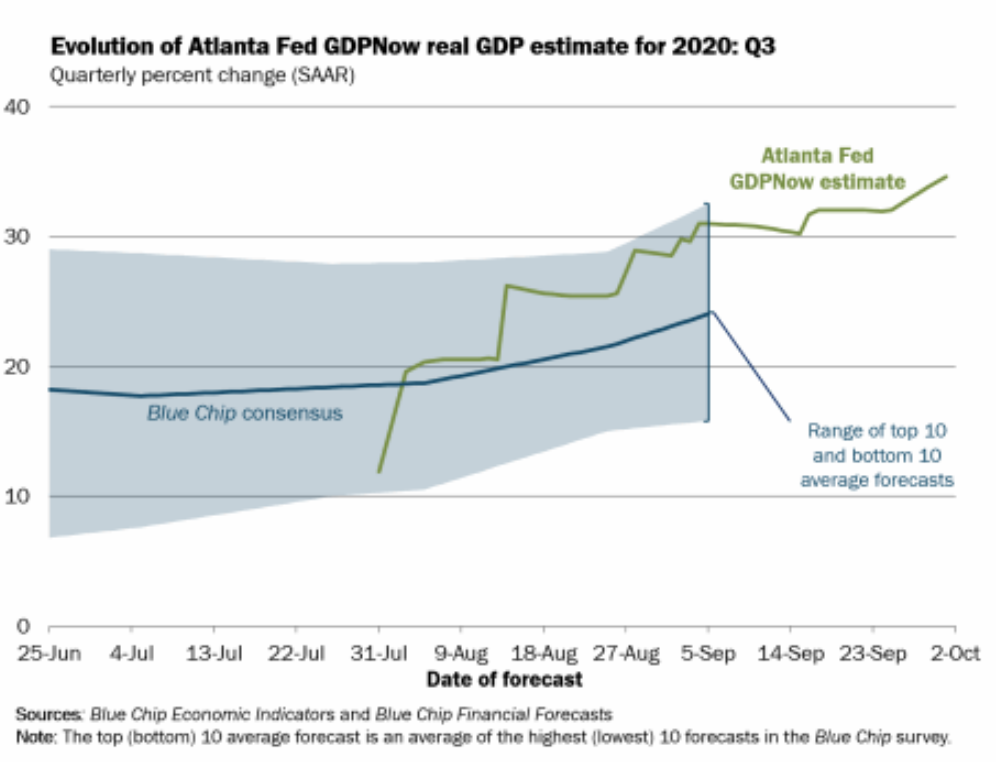 History will show that the 2020 COVID recession was one of the deepest and shortest of all time. The final GDP readings for Q1 and Q2 are now in the books at -5.0% and -31.4% at an annualized rate respectively. The highest ever quarterly GDP reading in the U.S. was +16.7% during the Truman administration in 1950. Remarkably, the consensus estimates for Q3 2020 GDP are in the +25% range, which would shatter the previous record. We will find out what the first reading is for this important metric on October 29th, five days before the presidential election.

Though the data seems very promising, the economy is still quite fragile. That is why the Fed has telegraphed that they do not plan to raise rates for the next few years and an additional fiscal stimulus package needs to be implemented to help the unemployed and businesses that have been most hurt during the pandemic to keep their heads above water. 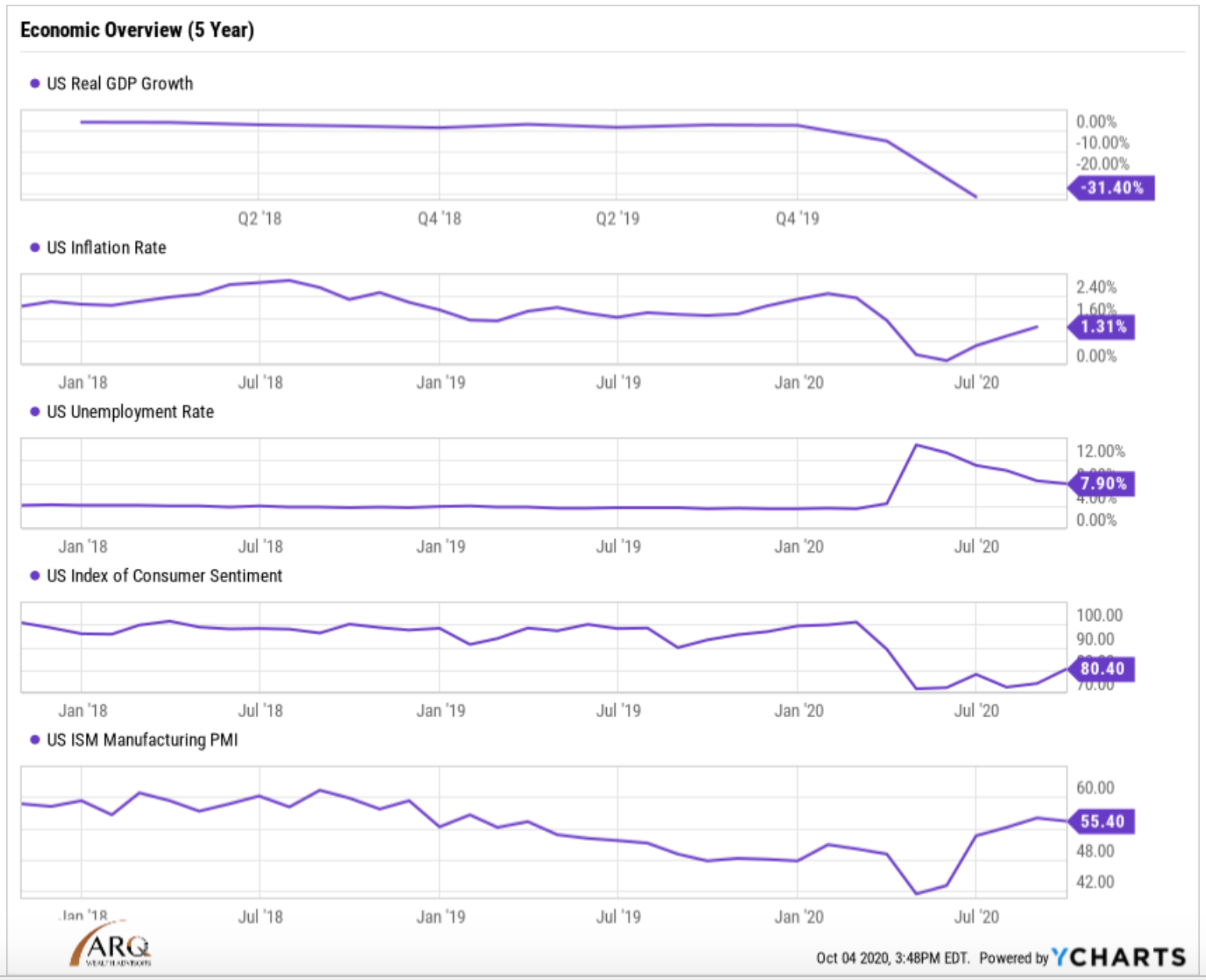 Overall, things have improved in many areas. Most notably, the unemployment rate is now under 8%. We would expect the rate of change to slow at this point. It will most likely take a few years to get back to full employment (4% range), as many businesses have permanently closed and sectors like travel and hospitality will not get back to a level of normalcy for some time. Manufacturing has been a bright spot in recent months along with anything related to housing. The ever important consumer sentiment metric has been slowly rising as approximately 50% of laid off and furloughed workers have been re-employed and businesses and workers are learning how to live their lives during the COVID pandemic. The bottom line is that for a fully sustained recovery to take hold, the economy will need to fully open.

Q3’s equity market performance was consistent with Q2’s. Strong returns was the overall theme, but with a bit of turbulence in September. Typically, volatility does rise a few months before an election season. The lack of clarity on a second government stimulus program, areas of the market pushing into overvalued territory, and the COVID disease itself was more than enough to trigger a market correction. There have been three separate pullbacks greater than 5% since the market trough in March, with September’s being the most significant; the S&P 500 dropped approximately 10% while the technology sector fell 14%. Coincidentally, September is the weakest month of the year historically, while November and December have been the strongest. Since 1950, here is how the market’s returns stack up on a monthly basis: 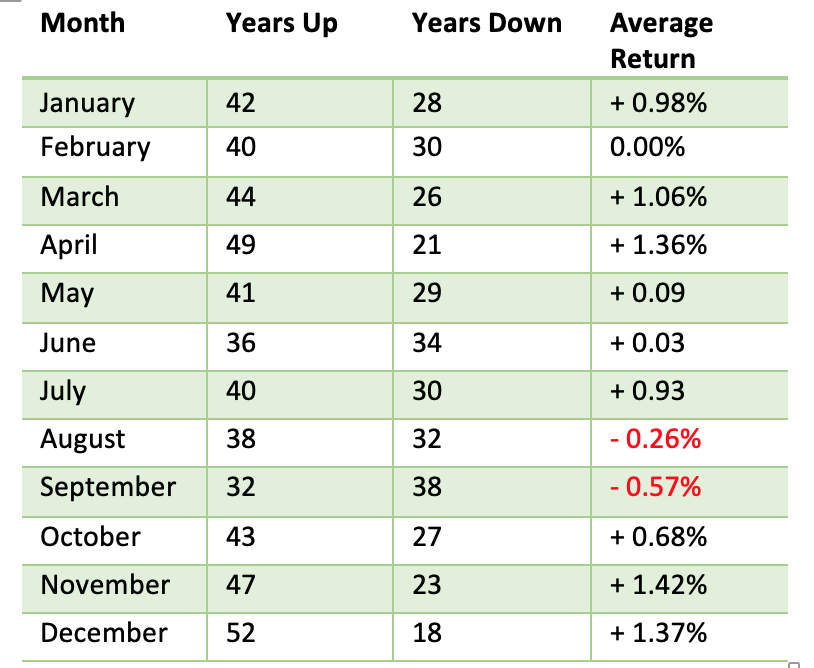 Even though the S&P 500, led by the big tech names fell the most from peak to trough during the quarter, it managed to eke out a win for the period versus other major domestic indexes. The small cap index, which had the best performance in Q2, brought up the rear in Q3 due to the heavy weighting in economically sensitive sectors like financials and commercial real estate, which lagged during the period.

Foreign stocks continued to recover from their March lows, with the most strength coming from the emerging markets. Both developed and emerging markets continue to represent a good value compared to the U.S. stock market at these levels. Additionally, emerging markets in particular tend to do quite well with a weakening U.S. dollar.

It is noteworthy that while the S&P 500 index corrected 10% during the month of September, foreign stocks only fell about 5%, offering a decent level of downside protection. On an absolute basis the stock market is a bit overvalued, but on a relative basis (versus bonds, inflation and cash) the market is fairly valued, with the exception of a handful of large cap technology stocks. Additionally, there are areas of the market that are absolutely cheap and will need to see a full re-opening of the economy to unlock their full return potential. Valuations aside, there is over $4 trillion dollars in cash on the sidelines that never got back in the market after the crash in the first quarter. This money will eventually find its way into the market, creating a tailwind for equity prices.

Bonds added to their 2020 gains in the 3rd quarter as interest rates remained at subdued levels. Much of the gains came from price appreciation as corporate and municipal debt continued to repair the damage done in March during the short period of panic selling. Treasury bonds which have a perfectly inverse correlation to interest rates were flat for the quarter as rates effectively remained unchanged. It is worth noting that while stock prices dropped by 10% in September, bonds did their job and served as a ballast in client portfolios.

Another area that worked well during the quarter were the low-risk alternative investments (Non-Traditional) that we use in our asset allocation strategies. These investments consist of merger-arbitrage and other event driven strategies like spin-offs and corporate restructurings, convertible arbitrage and option writing. Historically, these investments have proved to exhibit similar volatility as the bond market without the sensitivity to interest rates. As you can see in the chart to the right, these non-traditional alternative strategies booked returns in the 2% range over the past three months, outperforming Treasuries and with minimal volatility. Over time, we will assume that interest rates will climb from these historically low levels. These investments tend to thrive in rising rate cycles as opposed to high quality bonds which experience pricing pressure.

As we head into the final few months of 2020,  we believe that there is a balance between the positives and negatives for the capital markets and the economy. Outcomes will revolve around three core issues: The election, COVID 19, and policy. There are sure to be major headlines in the next month which may drive volatility a bit higher. We expect this to be the case. The election will be over soon and the market will enjoy a new level of certainty regardless of the outcome. Therapeutic innovations and vaccines are on the horizon to more effectively battle COVID, and Congress will most likely sign an additional fiscal stimulus package in short order to prop up the fragile parts of the economy. Regardless of how 2020 finishes, it will most definitely be one for the history books.