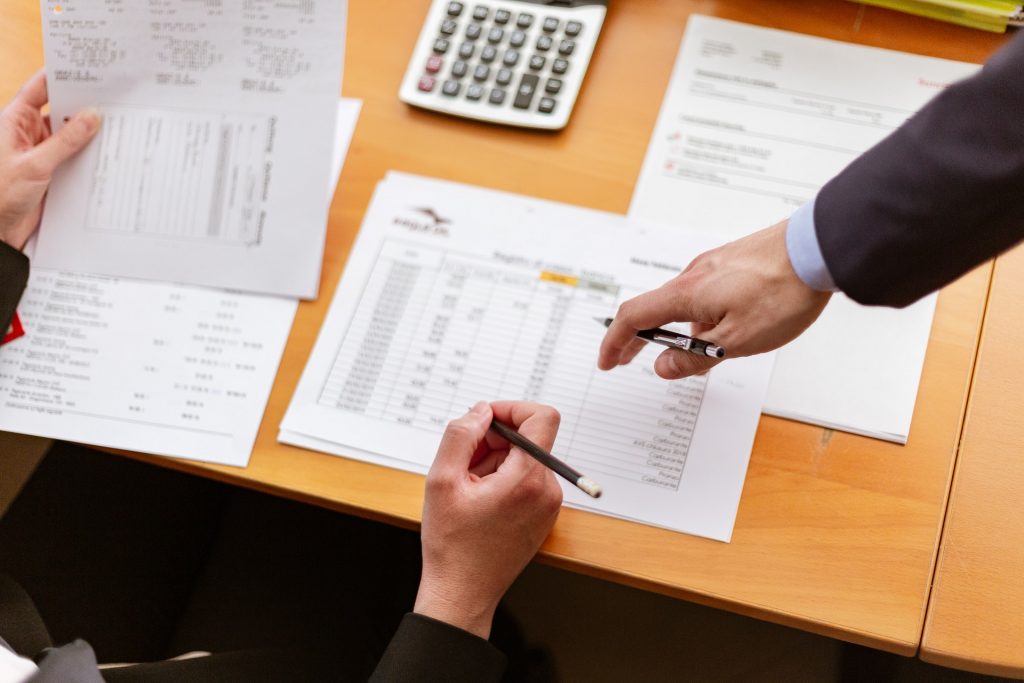 Consistent with the breathtaking market drop in the first quarter, the second quarter of 2020 was another one for the record books; the past three months in the capital markets have formed the coveted “v-shaped” recovery. Stocks were down approximately 35% at their worst in March and rallied into the end of March, posting losses for Q1 in the -22% range. As soon as the Fed and the government stepped in with unprecedented monetary and fiscal stimulus, the market took off like a rocket ship, logging additional returns in the 20% range for the 2nd quarter. It is worth noting that a loss of 22% takes a gain of 28.2% to get back to even. The equity market is a forward looking pricing mechanism, so the fear and uncertainty around COVID-19 and the damage to the economy has taken a back seat to the future recovery of corporate earnings and better economic data. At some point in the near future, stock prices will need to be supported by fundamentals, not just the prospect of a vaccine and an economic recovery.

While we are currently in one of the deepest recessions in U.S. history, it is likely going to be one of the shortest. Certain sectors of the economy and certain companies have been thriving throughout the pandemic such as technology and communication services, while other areas such as travel & tourism and hospitality have been decimated. That said, high frequency data such as airline travel, hotel bookings and gasoline usage have all jumped dramatically over the past several weeks.  As we get closer to a vaccine and stronger therapeutics, the areas that have been hurt the most will have the greatest upside. The chart below illustrates just how much improvement there has been to the economic data over the short-term; a historic drop followed by a historic rise in just a few months. 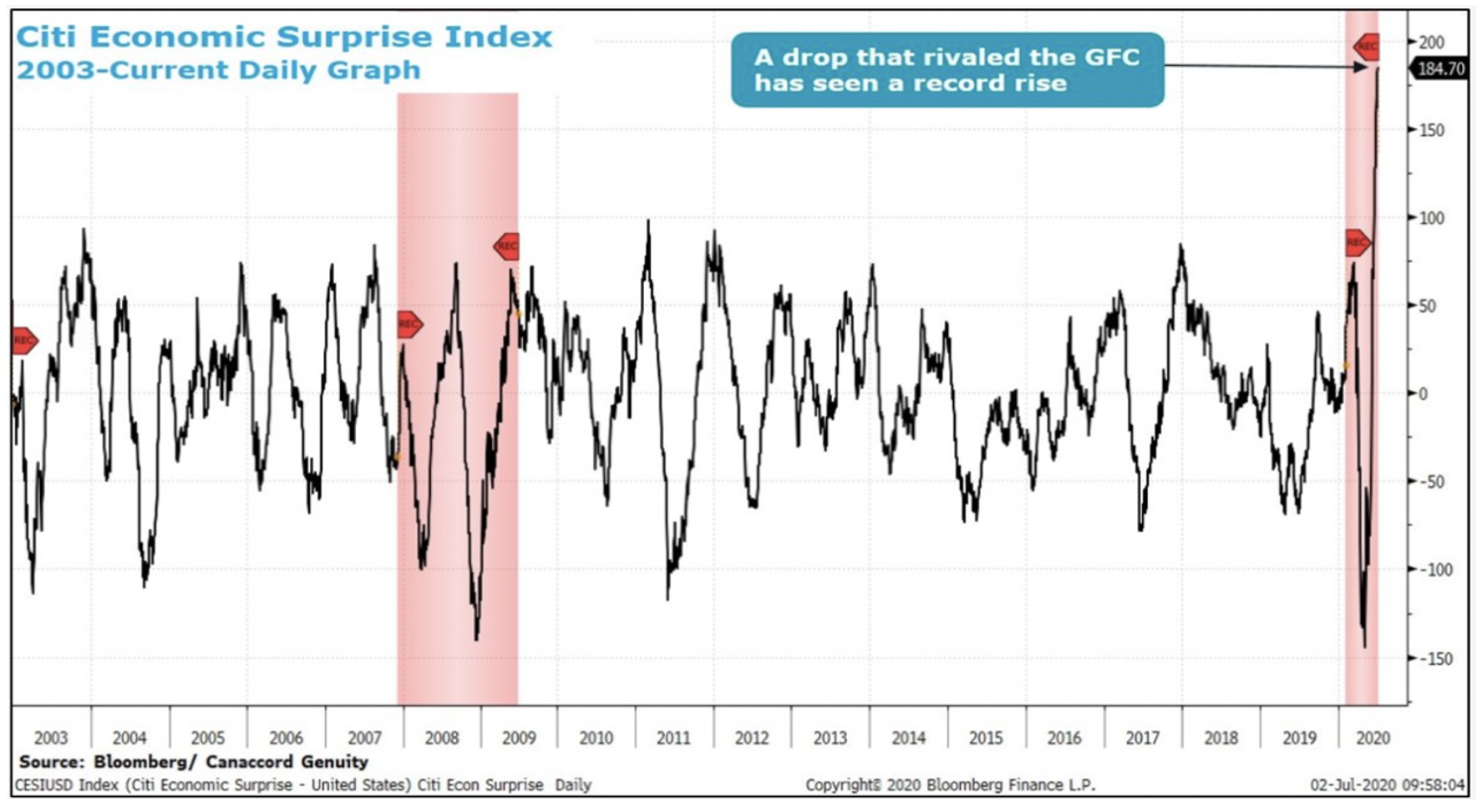 The chart below shows some encouraging data, the most impressive being the unemployment rate; the past two months of data have greatly surprised to the upside; forecasts were for 20% unemployment in May and the most recent level came in at 11.1%. Although this is promising, the unemployment rate will not likely get back to 4% for a few years. Additionally, consumer sentiment has taken a positive turn in recent weeks as workers are getting rehired and the enhanced unemployment benefits have provided increased support. The most interesting and most important metric will be GDP over the next couple of quarters. Q2 estimates are going to be incredibly low, in the -30% to -40% range. Keep in mind that most of the economy was shut down for a good part of March, April and May. Consensus estimates for Q3 and Q4 are for a sharp rebound in economic activity, which would make the 2020 COVID recession one of the shortest in history. 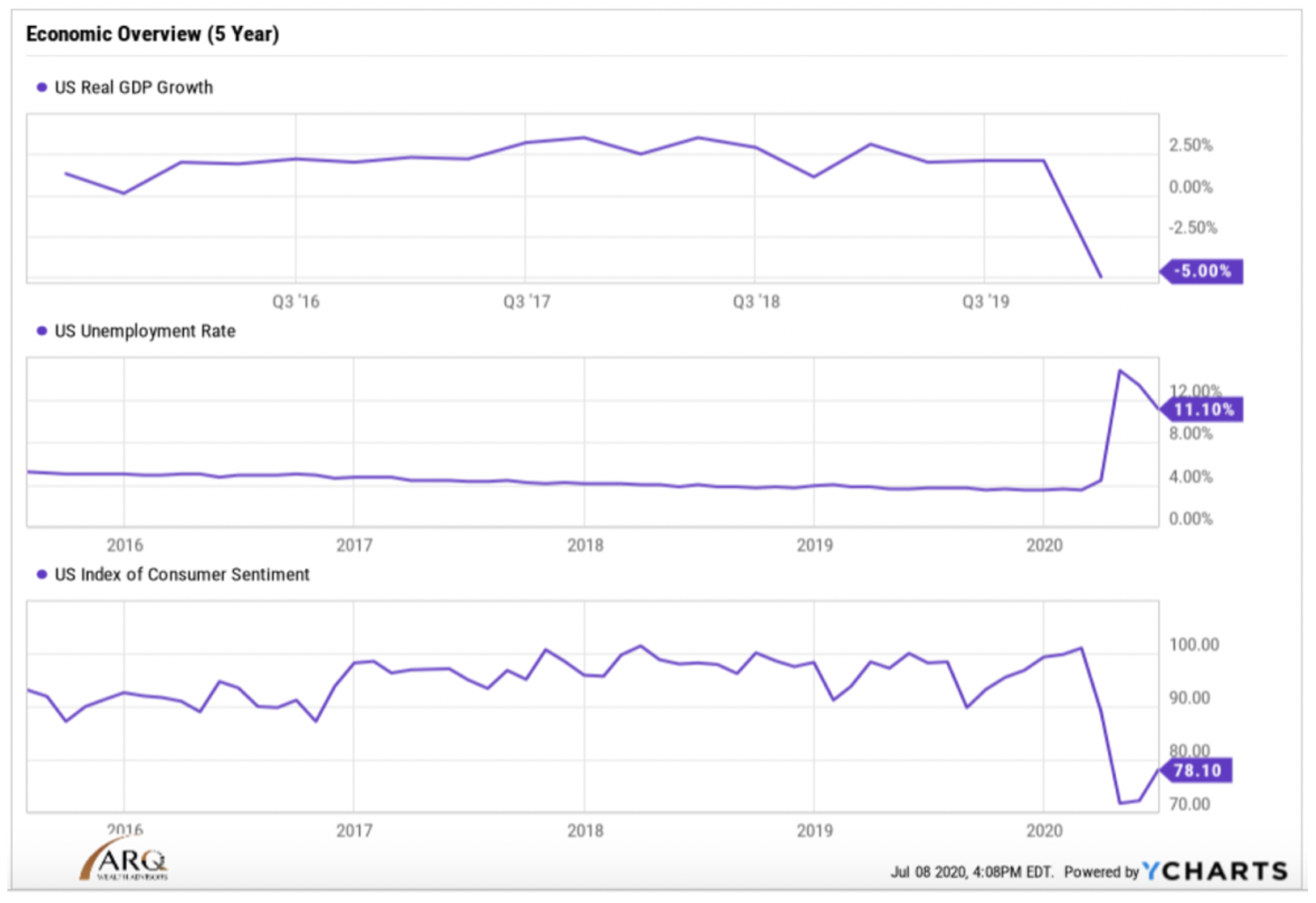 Equity markets across the globe just logged one of the best quarters of all time. For investors that were able to stomach the dramatic drawdown in the first part of the year, the last few months were a textbook example of why it is important to “stay the course.” Panic is not an investment strategy, rather volatility creates opportunity, so in hindsight plowing money into the market when it was down 30%+ would have been ideal. It feels counterintuitive to buy when the market seems to be in freefall, but that’s what you are supposed to do right? Remember buy low and sell high? We actually added equity exposure to client portfolios in the March through May timeframe in order to maintain target asset allocations. So now the question is why is the stock market so high when the economy is still in recession, businesses are struggling, and so many people are out of work? First and foremost, it is important to understand that the stock market and the economy are two different things and that they do not move in lockstep. Generally speaking the market will reflect economic conditions, but there could be lengthy dislocations because economic data is backward looking, while the stock market is a reflection of corporate profitability and future earnings.

While the S&P 500 Index has been the best performing index due to the dominant performance of the “Fab Five” stocks (Amazon, Microsoft, Google, Facebook & Apple) in recent years, small cap stocks which were hit the hardest in Q1, had the best recovery in Q2. The outperformance of small and mid-cap stocks is typical after a major market trough and the transition into a new economic expansion.

Foreign stocks also delivered big returns during the second quarter. Emerging markets, Asia specifically, has handled the fallout from the virus fairly well on a relative basis and foreign markets are beneficiaries of a weakening U.S. dollar. In fact, during the month of June the emerging markets sector returned 7.35%, developed foreign markets returned 3.40%, while the S&P 500 and Dow returned 1.99% and 1.82% respectively. Also noteworthy, the S&P 500 Index is currently yielding 1.9% while foreign equities yield 3.0%. Based on the U.S. dollar at risk of losing more ground due to the incredible increase in the money supply along with foreign equities remaining a relative bargain versus the U.S. market, we continue to allocate 30% of equity holdings within client portfolios to diversified foreign investments.

Broadly speaking, stock prices are at elevated levels relative to historical norms. The 10-year Treasury yield under 1%, cash yields at 0%, and unlimited Fed support are also far from historical norms. There really is no precedent for today’s backdrop, but the people that are “printing the money” are telling you that the only way to make a profit is in risk assets, hence the old saying, “don’t fight the Fed.”

With the exception of U.S. Treasury bonds, almost all other bond classes experienced significant drawdowns in February and March alongside the stock market. The reason for this was Treasury bonds are the ultimate flight to quality asset; money floods into Treasuries during times of crisis even though these bonds are currently very expensive and the yields are historically low. All other bond prices dropped due to the fear of the worst case scenario, which would be mass defaults. Of course this did not happen as the Fed came to the rescue backstopping the credit markets with various facilities, which stabilized bond prices in short order.  In fact, since this inflection point at the end of March, Treasury prices have been flat while the underperforming bonds in Q1 redeemed themselves in Q2 recapturing all of their losses.

Currently, the yield of the benchmark 10-year Treasury is 0.68%, while prices are trading at significant premiums to par. Essentially, the return prospects for Treasury bonds from current levels are dismal. We continue to favor investment grade corporate bonds and tax-free municipal bonds, both of which yield in the 2 – 4% range and are trading at prices that are more attractive than Treasuries. Additionally, we remain committed to low volatility, non-traditional investments that carry similar risk and volatility metrics as bonds without the interest rate sensitivity.

As we head into the second half of 2020 there are sure to be setbacks in the fight against COVID-19. We are also getting closer to one of the most contentious elections in our country’s history. On the other hand, a vaccine and more effective therapeutics are looking very promising and the economy is beginning to repair the damage inflicted by the shutdowns. Regardless of who wins the Presidential election, the U.S. will carry on, capital markets will function, and corporations will innovate and generate profits. The shock we experienced earlier in the year is behind us, but we are sure to experience more volatility based on economic data, mixed corporate earnings, and news flow. Our diversified strategies are positioned well to take advantage of further price appreciation while managing downside risk.

“Yesterday is not ours to recover, but tomorrow is ours to win or lose.”   -Lyndon B. Johnson