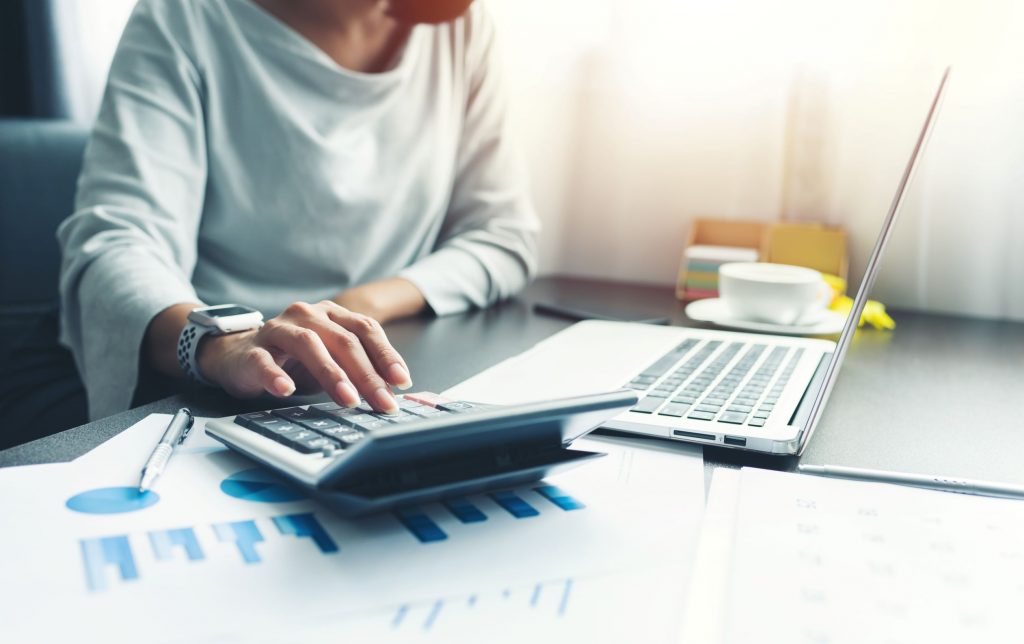 The first quarter of 2022 could be described as tumultuous, chaotic, stress-inducing, you name it. During the first three months of 2022, we saw the worst bond market returns in history and the worst stock market correction since the March 2020 pandemic market collapse. Not only are we still dealing with what is hopefully the tail end of Covid, but there are a slew of other factors that have increased volatility and uncertainty: the highest inflation in forty years, an aggressive monetary policy pivot by the Fed and a very precarious, unprovoked war in eastern Europe. With the exception of commodities, almost nothing delivered positive returns for the period.

Being down 4% – 6% in a quarter should not be viewed as a big deal. In fact, these drops in portfolio balances should be considered garden variety and occur about once or twice per year. As wealth managers, one of our greatest responsibilities is to avoid a permanent impairment of capital. This means unrealized losses that are so steep that our clients cannot recover in short order and therefore cannot meet their retirement goals and needs. Usually, when stocks are in a corrective phase, bonds serve as a ballast; in this case, bond losses were just as steep as stock losses. On a positive note, stocks and bonds are now cheaper and have higher yields to pay out to investors.

Inflation has become front page headlines. Higher prices have hit all consumers in their bank accounts. Gas prices, autos, hotels, food, energy to name a few have all increased dramatically. The two main culprits are the supply chain issues caused by shutting down the economy during the pandemic along with the tremendous money creation that the U.S. “printed” over the past two years. This extra money was used for PPP loans, unemployment benefits, stimulus checks, and rent & mortgage relief. Without this fiscal support, many people and businesses would not have been able to survive the pandemic. Now it is time to unwind the stimulus and beat down inflation. The Fed has set off on a new monetary policy regime and the big question is, can they engineer a soft landing or will reversing the bond buying program and raising rates put us into a recession?

Another major theme that needs to be considered going forward is the trend of de-globalization. For decades, we were able to import deflation by having China manufacture much of our goods and materials cheaper than we could do domestically. Early on in the pandemic, it became apparent that this put the U.S. in a subordinate position.  Importing oil from Russia and the Middle East has also proved to be a risky proposition. It seems like this trend has been shifting to a focus on more domestic responsibility. This likely means that higher inflation than we’re used to is here to stay for a while. 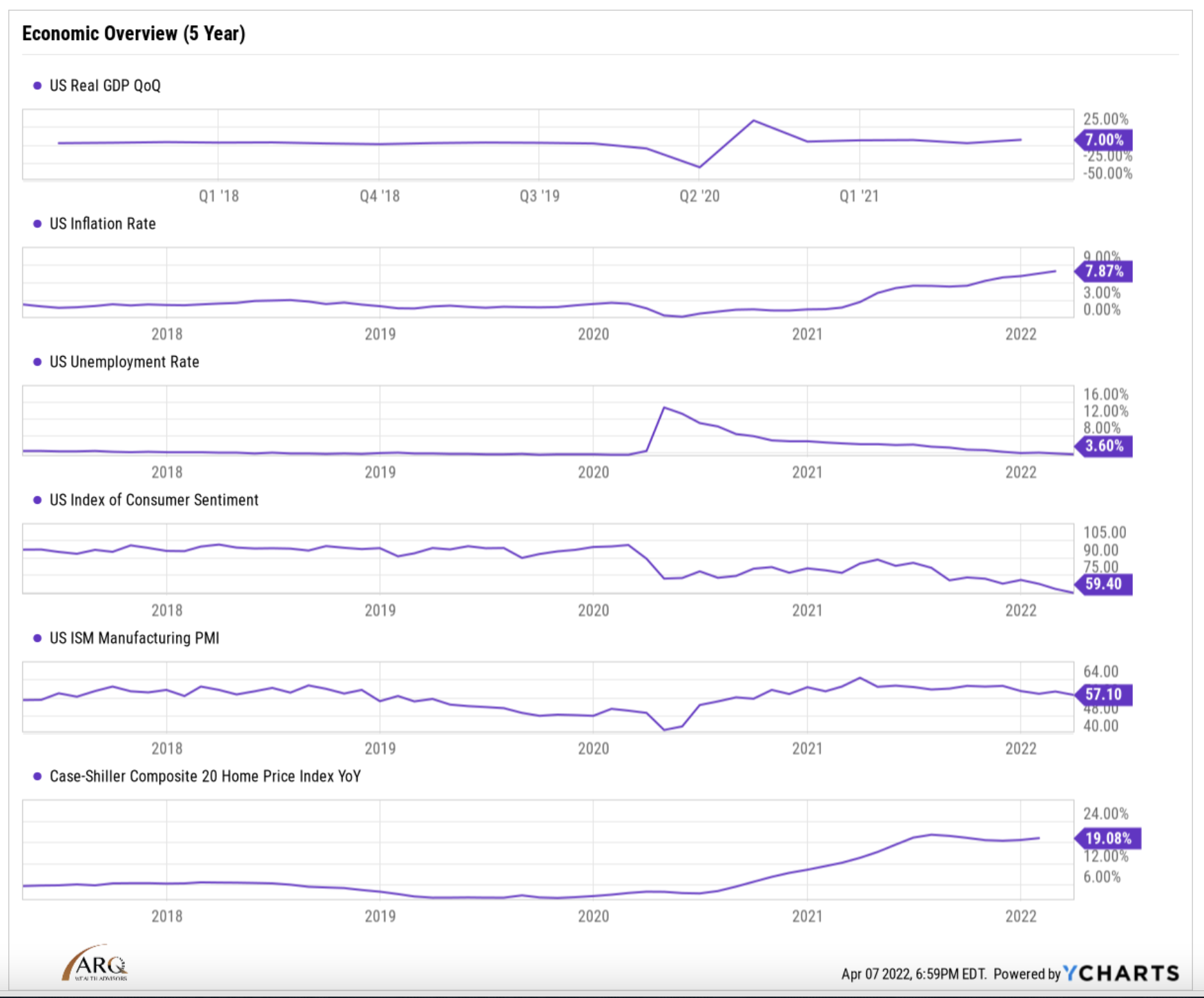 At the end of April, the first estimate of Q1 GDP will be released. Unlike the above trend economic growth we saw during the final quarter of 2021, we can expect a number in the low single digits. The Conference Board recently lowered its forecast to 1.7% versus the 7.0% in Q4. Much of the drop can be attributed to the spike in inflation and residual effects of Covid. The Board’s forecast for the full year 2022 is a healthy 3.0%. This is approximately the average annual GDP growth in the U.S. for the past several decades.

Both the housing and labor markets are on fire. Just two years ago, the unemployment rate was over 14% and now it’s close to all time low levels with over 11 million job openings. Rising housing prices as we know, creates a “wealth effect,” and nationwide, prices are up a whopping 19% year over year.

It is worth noting that consumer sentiment has shown some weakness in recent months. Although wages have grown at their fastest pace in decades, the inflation rate has grown even more. The stress of paying $80 – $100 to fill up your gas tank and the increased cost of grocery shopping for example are big financial burdens for most Americans.

Historically, when this yield curve dynamic occurs, there is an increased chance that the economy is heading for a recession. The good news is there is no guarantee a recession will occur, especially because the inversion was so short-lived. Additionally, the average time until a recession starts from an inversion is almost 2 years into the future and the stock market tends to do quite well leading up to an economic downturn.

We’ve talked about value stocks versus growth stocks over the past few quarters and explained that even though stocks like Tesla, Apple, and Zoom are very exciting and innovative companies, value stocks (financials, energy, materials, industrials) have looked much more attractive on a valuation basis. That said, we’ve been slowly adding exposure to these sectors over the past several quarters to take advantage of this pricing opportunity and to take off some of the exposure of the more expensive parts of the market. Aside from valuations, value stocks tend to outperform during periods of rising interest rates, and this is certainly the case today. You can see the large performance disparity in recent months in the chart above, as rates have begun to rise more aggressively. A closer look “under the hood” shows just how well the energy and utilities sectors (only 6.3% of the S&P 500’s weight) have done this year, while the giant technology and consumer discretionary sectors (39.9% of the S&P 500’s weight) have had a rough start to 2022.

As of the end of the quarter, the most expensive part of the U.S. stock market is large cap growth, while the cheapest part of the market is small-cap value. The most attractive sector from a valuation standpoint is energy; oil prices have skyrocketed, the economy has reopened from Covid, and auto and air travel has picked up to pre-pandemic levels. Have you been to an airport lately? How about rented a car? Good luck!

Foreign equities remain a bargain versus U.S. stocks on the whole, but have recently faltered due to a flight to U.S. dollar investments in the face of the war in Ukraine. It is worth noting that the highest corporate earnings growth forecasts on a regional basis for 2022 are in the emerging markets. Currently, foreign equities are trading at a 32% discount to U.S. equities and represent approximately 30% of our clients’ total stock exposure in portfolios.

Even though it may feel like this is a less than ideal time to be invested in equities, it’s quite the contrary. Stocks tend to do fairly well in the beginning stages of a rate tightening cycle, in times of negative sentiment, and in periods of negative real rates (10-year Treasury minus inflation rate). All three of these dynamics are in play today.

To say that the bond market has had a tough go so far in 2022 is a huge understatement. In fact, it was the worst performance ever for a quarter. Due to the tremendous rise in both short and long-term rates, bonds across all categories have lost significant value. The 12-month chart to the right illustrates the parabolic move in rates both for the 2-year Treasury and the 10-year. In fact, the yield curve inverted briefly at the end of March. Much of the increase was accelerated in March as the Fed took a more hawkish stance on monetary policy to aggressively attack inflation. We’ve seen these rate spikes before; most recently in the spring of 2013 and the fourth quarter of 2018. They tend to be short-lived and provide us with opportunities to add bond exposure to client portfolios at more attractive prices and higher yields. Essentially, it’s some short-term pain for longer- term gain. Although our fixed-income/non-traditional holdings are not immune to price drawdowns, our positioning cushioned against some of the recent losses. In aggregate, our strategies lost 3.59% in the category for Q1 versus the 5.93% of the U.S. Aggregate Index. Municipals, long-term Treasuries and foreign bonds suffered a worse fate over the period.

It is our contention that much of the damage has been done, especially on the shorter end of the curve. Like the stock market, fixed income markets are a forward pricing mechanism and therefore yields have moved up in anticipation of the new rate hiking regime. In fact, the Fed is now telegraphing eight rate hikes this year, taking the Fed Funds rate from 0.00% to 2.00 by year- end. It will be nice to see decent yields on cash, money markets, and CDs again.

After three consecutive years of strong returns in the capital markets, 2022 has started off with quite a bit of weakness. Think of the last few months as a period of digestion. The markets are digesting the implications of the war in Ukraine, higher interest rates, and the highest inflation levels since the early 1980’s. Now is not the time to be a hero. Speculating on the next hot stock, hot sector, or making large changes to one’s asset allocation can easily backfire. We’ve seen this movie before and being well diversified, low cost, and tax-efficient is our playbook. Mid-term election years tend to be slightly more volatile than other years, and this year is no exception. The second half of 2022 could set up to be strong for the markets, with much of the uncertainty around Covid, Ukraine, election outcomes, rates and inflation behind us.