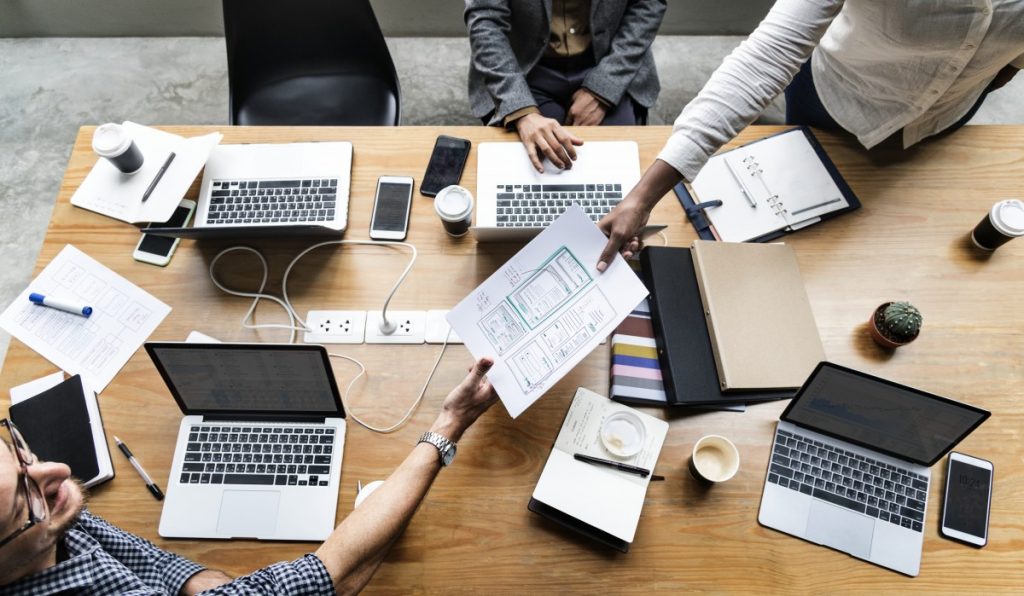 Ugh! What else can you say? 2022 is shaping up to be a lousy year for the capital markets. “Why” do you say? I blame it on the pandemic. When reality set in that we were heading into a global pandemic, governments and central banks from around the world took immediate monetary and fiscal policy actions. With the prospect of mass casualties and shutting down the economy causing enormous job losses and deteriorating corporate earnings, the U.S. created approximately 40% new dollars in 2020 and 2021 in order to keep our economy going. In normal times, we create about 6% or 7% new currency in a given year. This outsized dilution of our currency, pandemic induced supply chain problems, and excess demand from cash heavy consumers has led to the highest inflation we’ve seen in the U.S. in 40 years.

Hindsight is 20/20, but it now appears that the stimulus was overdone.  To make matters worse, the Fed was too slow to act, as they consistently stated that inflation would be “transitory.” Now, in order to bring down inflation, we must unwind the excess liquidity in the system. The Fed’s dual mandate is full employment and price stability. Up to this point, the employment picture has been very strong, so the focus is on beating down inflation. The aggressive Fed rate hikes will slow down demand, which will ultimately lower prices. As rates have moved up so far and so fast, the markets have repriced very quickly. In fact, we’ve never seen bonds lose this kind of value in modern history. That’s what makes this year so frustrating and painful. 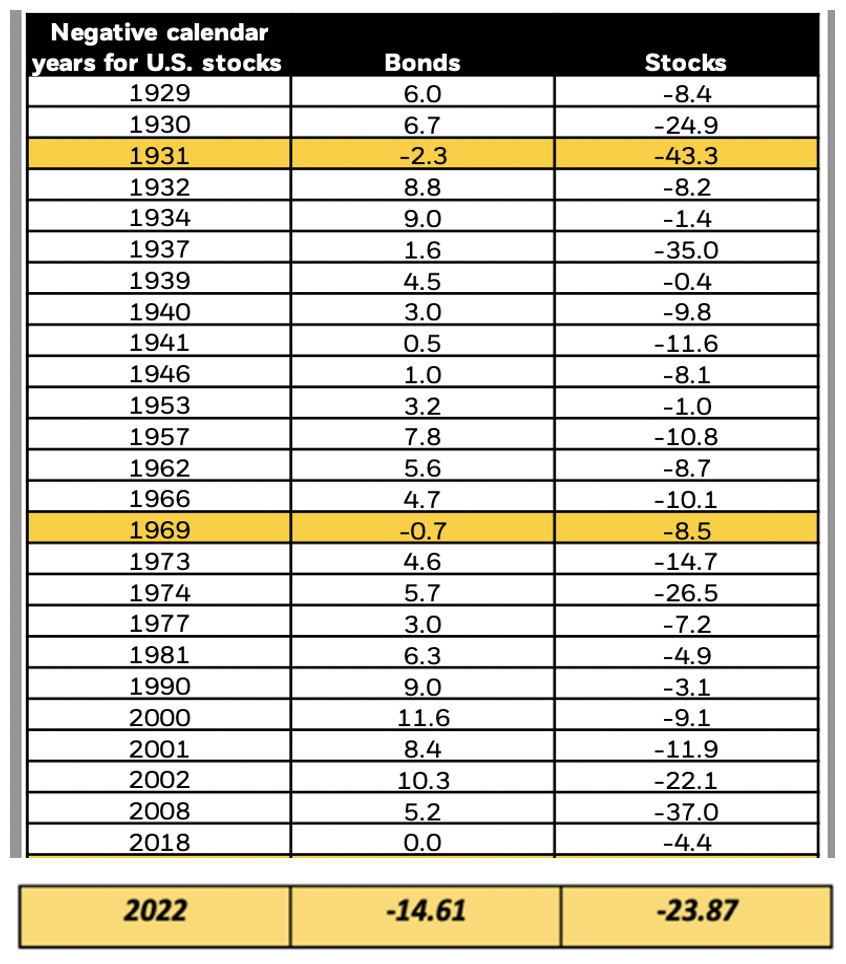 Bonds usually stabilize a diversified portfolio and hedge out stock market risk. For the first three quarters of 2022, diversification hasn’t worked. You can see from the chart above, that a conservative global portfolio of 35% stocks & 65% bonds had similar drawdowns as an aggressive 80% stock & 20% bond portfolio from quarter-to-quarter.

Another way to look at just how unprecedented this year’s stock/bond market dynamic has been is by the chart to the right. Since the Great Depression era, there have been 25 years out of 93 that the U.S. stock market experienced losses in a calendar year. Of those 25 instances, only 2 years also saw losses in the bond market, which proves that in most cases, bonds are positive in negative equity markets. The 2 years where bonds were also negative, the returns were almost inconsequential; 1931 -2.3% and 1969 -0.7%. If 2022 were to end on 9/30/2022, the last row of the chart would look like this highlighted yellow pop-out. 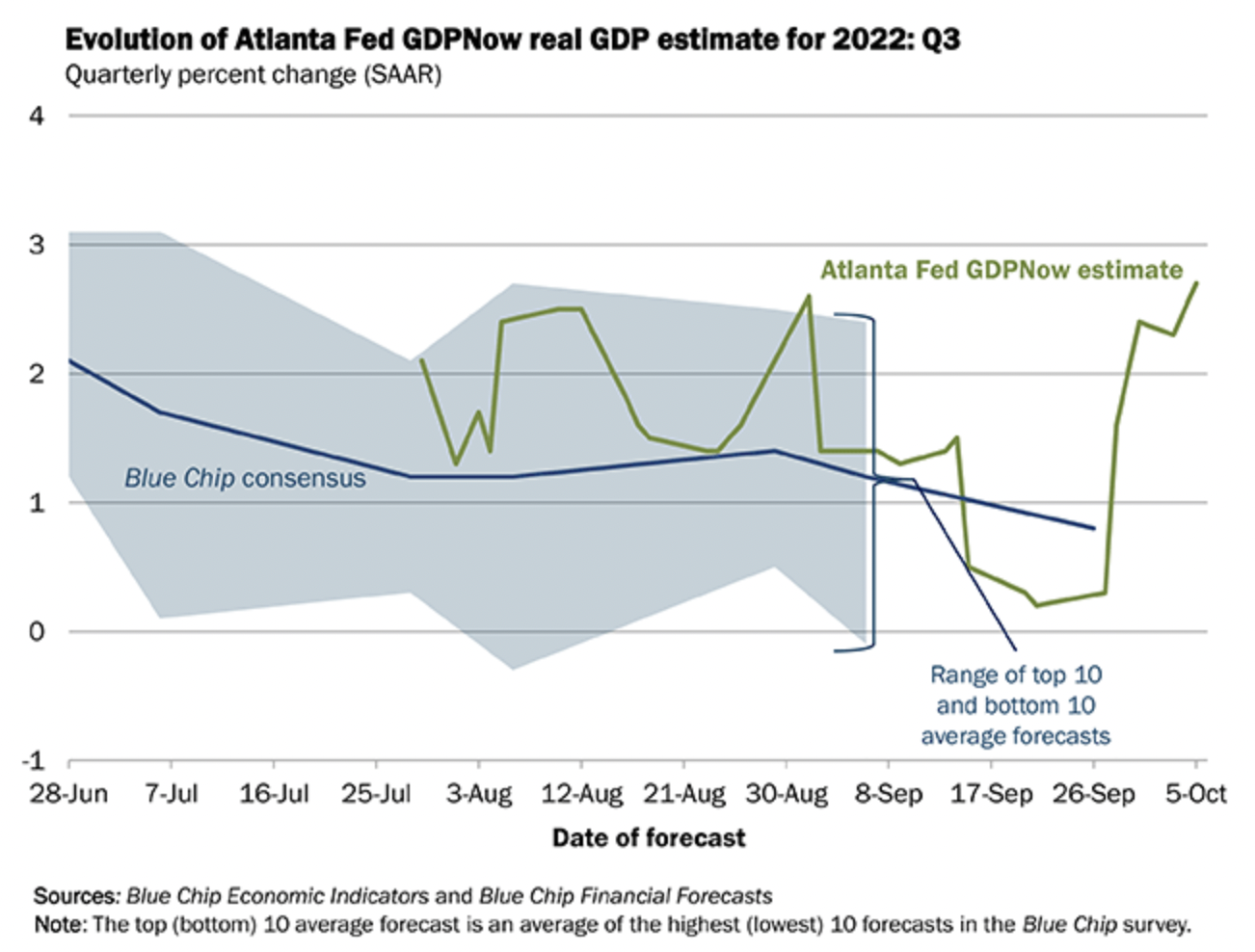 Current views on economic conditions in the U.S. remain downbeat. The prospect of a true economic recession is very real, but by all accounts it would be a shallow contraction due to a very strong labor market. Interestingly, we just had 2 consecutive quarters of negative GDP (Q1 2022 -1.6% and Q2 2022 -0.6%), which ordinarily would be considered a mild recession, but based on the NBER definition (National Bureau of Economic Research), we have not yet entered one. Their definition is “a significant decline in economic activity that is spread across the economy and that lasts more than a few months.” Based on the robust labor market, near record low unemployment and strong retail sales, how could we be in a true recession? In fact, based on the Atlanta Fed’s GDPNow model, the U.S. GDP forecast for Q3 is +2.9%. A positive number will most likely be attributed to large inventory builds and the strong U.S. dollar’s effect on net exports. What a difference a few months can make; the housing market has rapidly weakened based on mortgage rates more than doubling over the past year.

So what it really comes down to is, how far will the Fed go with their tightening policy in order to take inflation down to their target rate. And in doing so, how much damage will they do to the economy in order to achieve that target rate (currently pegged at 2.0%). This is the epitome of a balancing act; at present, the Fed’s terminal rate target for its funds rate is 4.6%. The markets already know this, but there’s some skepticism that the Fed will be able to raise the rate that high without having to stop prematurely. 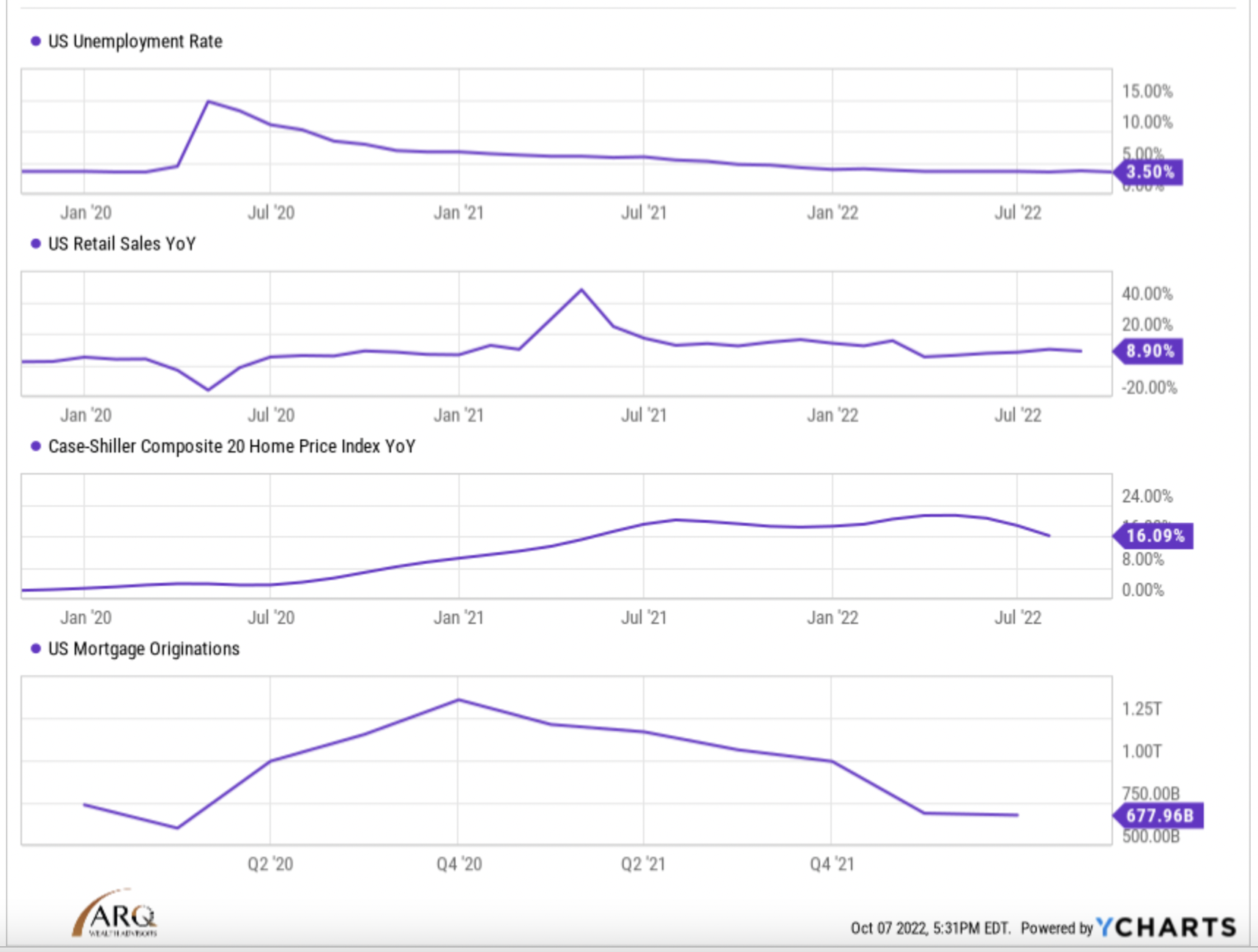 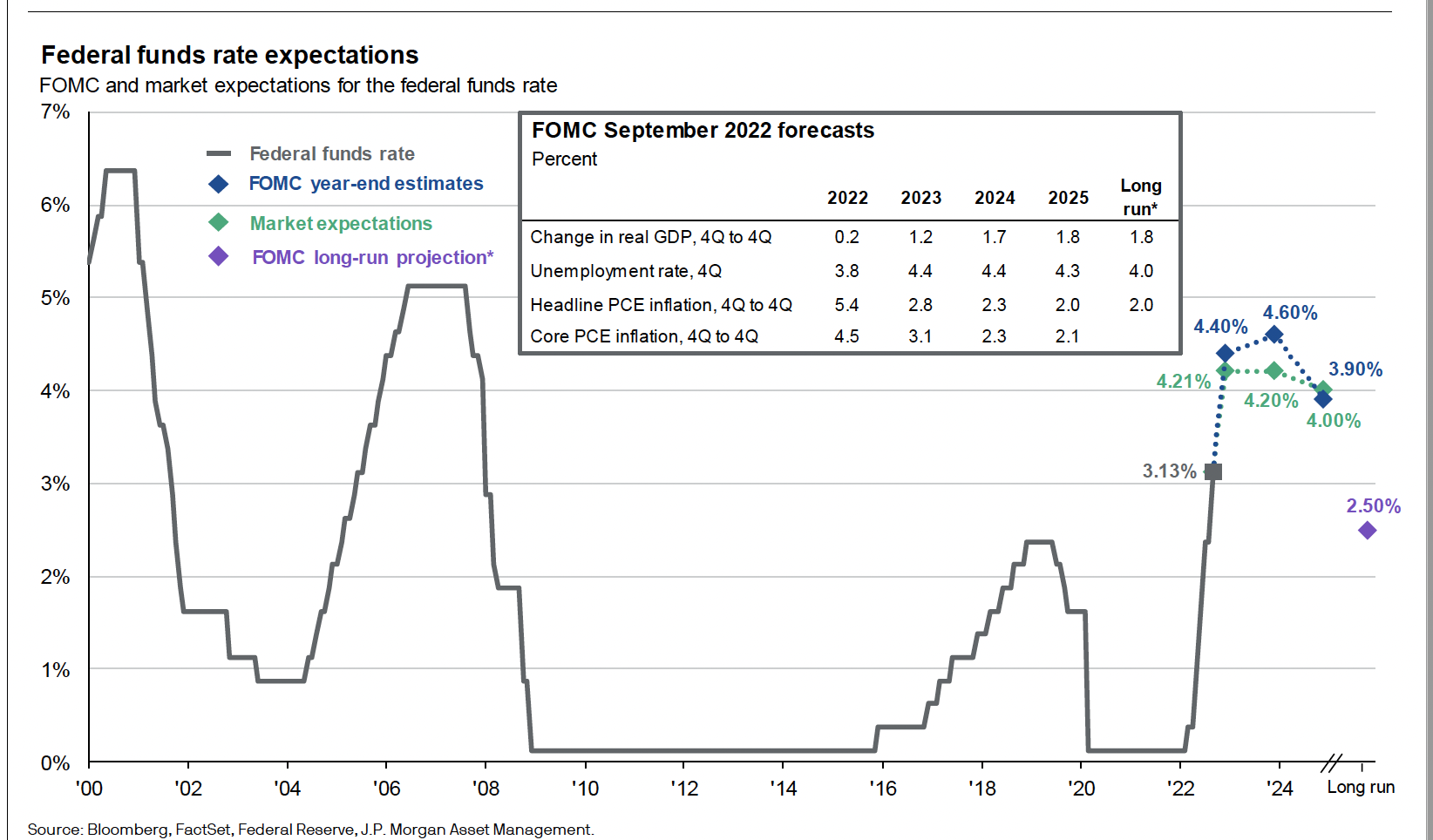 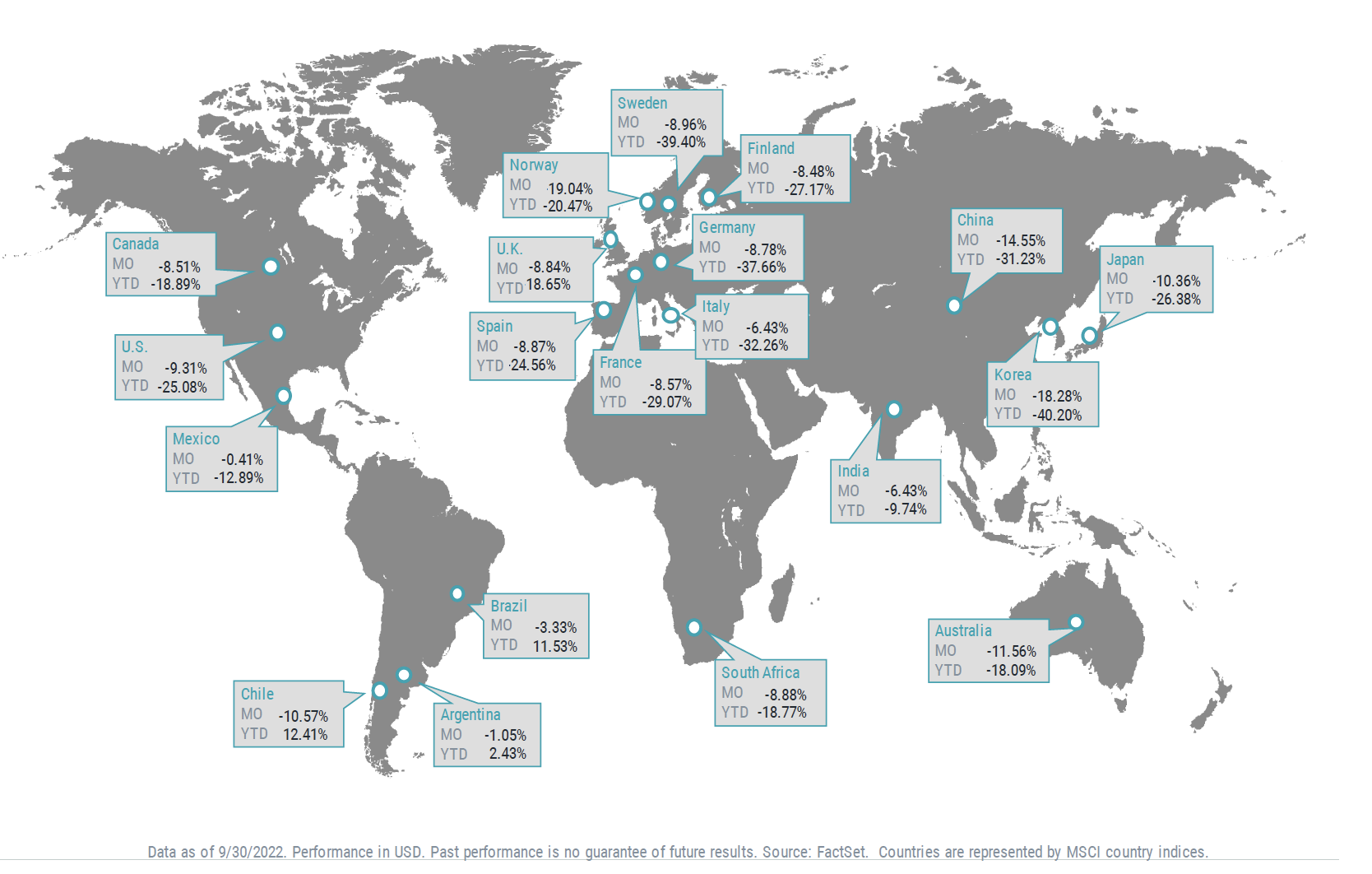 Including the current bear market (greater than 20% market drop) that we’re currently in the middle of, there have been 15 bear’s since WWII, so approximately 1 every 5 years. They are not unusual, they are not fun, they require patience, and they always lead into a new bull market. Non-recessionary bear market drawdowns average -24% and last about 10 months, whereas recessionary bear market drawdowns average -31% and last about 14 months. If we assume that this current market will be consistent with historical averages and we have a recession, then most of the time, and most of the drawdown is already behind us.

First small-cap stocks peaked in early 2021, then the tech-heavy Nasdaq peaked in November, 2021, and finally the S&P 500 peaked on January 3rd, 2022. The S&P soldiers (Microsoft, Apple, Google) have finally followed-suit.

Globally, we are not alone; with the exception of a few South American markets, it’s been ugly. Considering, the U.S. dollar is at 20-year highs and up 17% in 2022, it’s truly amazing that foreign stocks aren’t down significantly more. We attribute this to their lower valuations. U.S. small caps are also quite cheap at current levels. This is a very similar dynamic to the 2000-2002 Tech Bubble and the 2008-2009 Great Financial Crisis. When the market finally turned up, it was the foreign markets and U.S. small caps that had the most powerful returns. It is realistic that some of these super-cheap asset classes are spring-loaded for big returns in the near future. Although we have bias toward U.S. equities, we are positioned accordingly.

In the near term, the key for markets to stabilize, is positively trending inflation data and Q3 earnings results. Obviously, corporate earnings are expected to contract over the next few quarters, but the contraction needs to be mild in order to justify higher stock market levels. Data points over the first few weeks of October will be very telling.

Bonds have been losing value for over a year now, based on rapidly rising interest rates. Our strategies have certainly not been immune. We were taking our cues from economic data and the Fed’s telegraphing their plans to raise the Fed Funds Rate in 2023 or 2024. Their early and aggressive pivot took everyone by surprise. Our positioning in lower duration bonds coupled with non-traditional alternatives helped to cushion some of the blow, booking returns in our bond/non-traditional holdings of -9.64% in aggregate for the first three quarters of 2022. 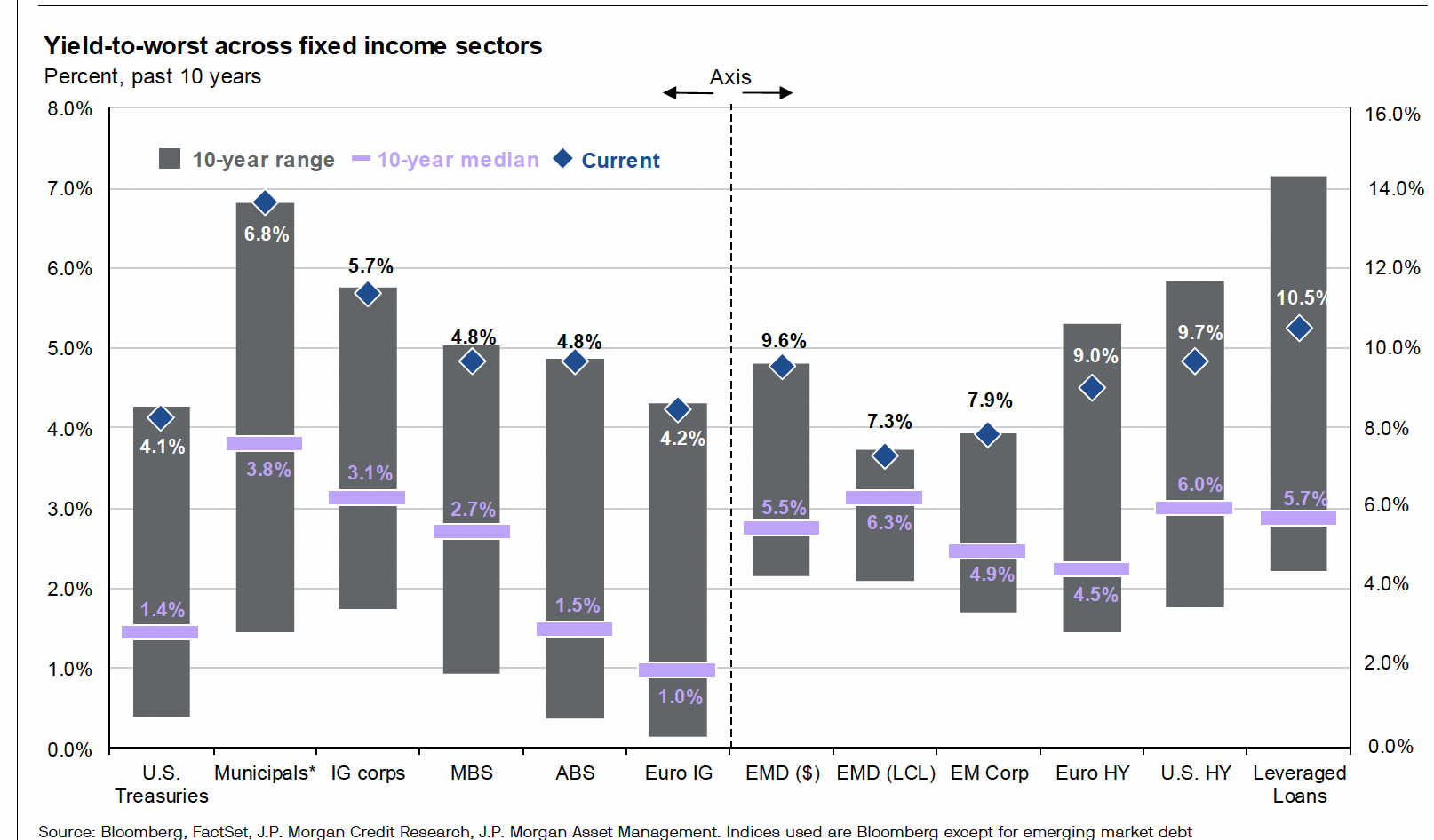 Short-term pain for long-term gain; that’s the silver lining here. Now that bond prices have been walloped, yields are now quite attractive. Low prices and high yields are an ideal combination on a go forward basis. In fact, because bond returns are more math-based than stock returns, it’s very easy to start getting excited about the prospects for big returns in the bond market over the next few years.

To say it’s been a difficult year in the capital markets is an understatement. Stock valuations in most sectors are now cheaper than their historical averages. Bond values are deeply discounted as well. At this point, we feel there is an asymmetric risk/return profile for most assets, meaning the upside return potential is greater than the downside. There is always potential for further downside, but historically speaking, we are heading into the strongest months of the year for equities and the mid-terms are around the corner, which is usually a big positive for stocks. With mixed economic data and geo-political risks as a back-drop, expect more volatility, but patient investors that are able to ride the rollercoaster will be handsomely rewarded for staying the course.