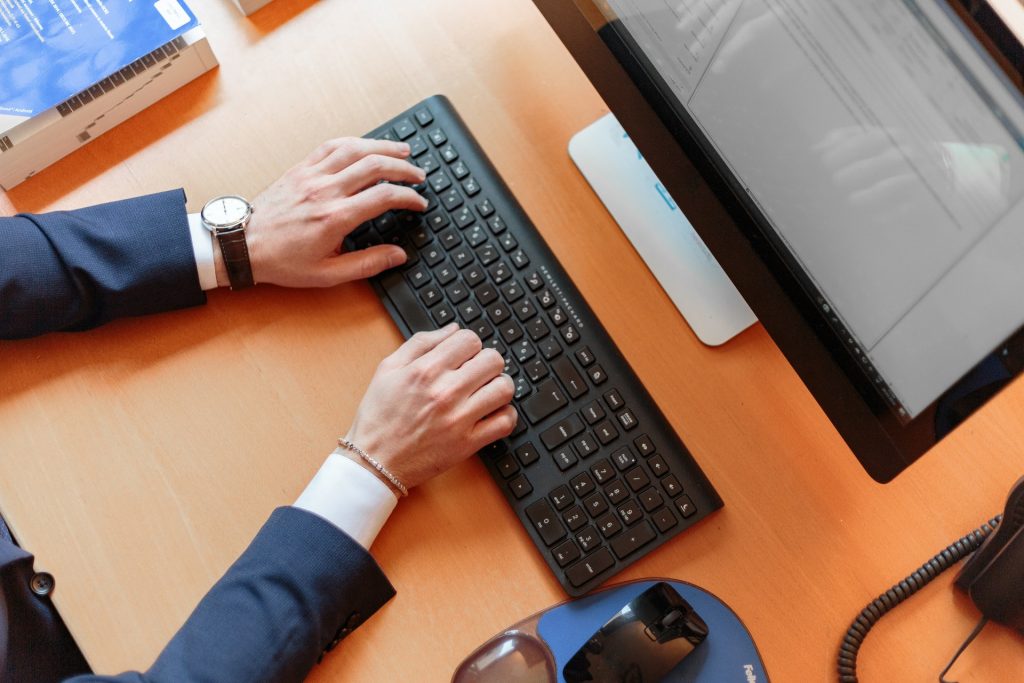 ARQ Wealth Advisors: Q2 2022 Commentary –To recession or not to recession, THAT is the question!

To say that the first half of 2022 was painful for investors is an understatement. Some of the largest losses in history occurred during the last several months. Normally, just one of today’s major market moving events would create volatility and uncertainty, but we are experiencing a confluence of these events simultaneously: war in Ukraine, the highest inflation in decades, a global pandemic, and the Fed aggressively raising interest rates. Calgon take me away!!

The main culprit for the market’s losses is inflation. Inflation and higher interest rates cause markets to reprice. Higher lending and borrowing costs, along with stresses on the consumer and corporate profits are ample reasons for valuations on stocks to move lower. Additionally, rapid interest rate increases have caused bond prices to follow stock prices downhill. The Fed led everyone to believe that these inflation levels would be “transitory.” Obviously, they were wrong, and have embarked on an aggressive policy plan to combat higher prices. Presently, we are most likely at or near peak inflation levels; most economic forecasts are indicating lower levels in the second half of 2022.

We are officially in a bear market, meaning the S&P 500 benchmark index has fallen more than 20% from its high water mark. In fact, this is the worst first half of a calendar year for the stock market since 1970. Bear markets can be very scary and upsetting, but steep stock market drawdowns are unfortunately an inevitability of investing. Stocks go through cycles, always have and always will. Prior to this current bear market, there have been 14 bears since 1947, so about 1 every 5.5 years. They have ranged in magnitude and duration; average loss of approximately 30% and average length of approximately 9.5 months. As of June 30, 2022, this bear has had a max drawdown of 24% and has been going on since the S&P peaked on January 3rd (6 months). We think it is safe to say that although things may get a little worse from here, most of the damage has been done.

The next issue to consider is, are we already in a recession or is a recession on the horizon? The stock market has most likely already priced in a recession based on all of the extreme pessimism. A funny old saying by famous economist, Paul Samuelson is, “The stock market has predicted nine of the past five recessions.” Recessions are fairly common and part of a normal economic cycle. They are defined as two consecutive quarters of negative GDP. Well, we’ve already had a -1.6% GDP print in Q1 of 2022, and Q2 looks to be right on the fence. Not all recessions are created equal, and if we have one this year, it would be an odd one being that unemployment and consumer spending levels remain strong. All that being said, we never really know if we’re in a recession until after the fact, as the data takes months to measure and then publish. It is also worth noting that the stock market usually turns up several months before a recession concludes. 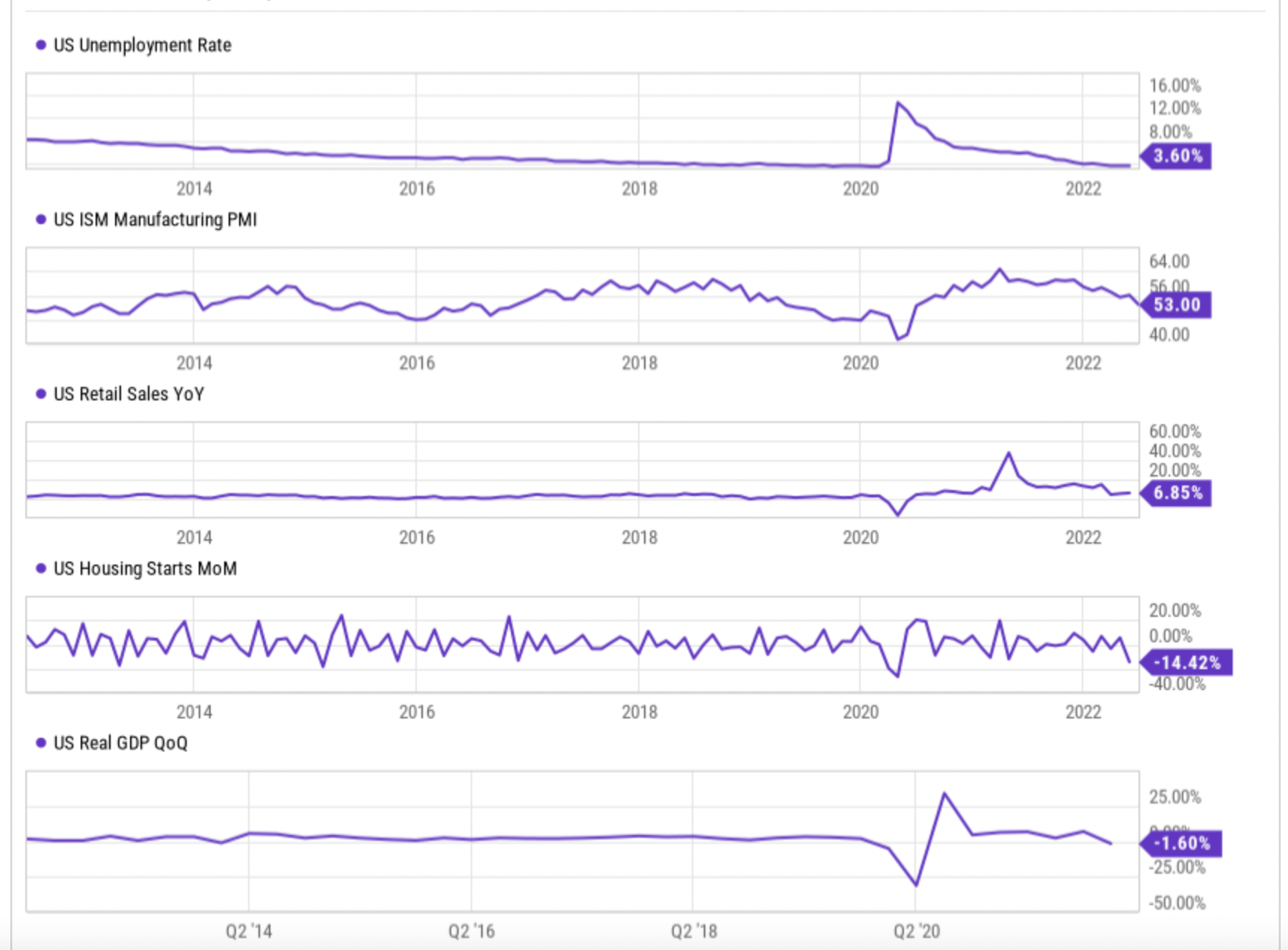 On July 28th, the first estimate of Q2 GDP will be released and we’ll find out if we’re already in a recession. If we are, the biggest contributors will most likely be falling real disposable income, capex (capital expenditures by corporations) due to inflationary pressures, and a widening trade deficit. At present, the economy is structurally sound, so a recession should be relatively mild.

From the 10-year chart to the right, you can see that the unemployment rate is close to all-time lows, manufacturing output has weakened, but is still growing (any number over 50.0), retail sales are at long-term trend, and new housing starts are cooling off, most likely due to higher mortgage rates.

It would almost be a good thing to get confirmation that we are in a mild recession and just get it over with. The Fed will need to be nimble to raise rates into a slowing economy and then take its foot off the gas in time to not do more economic damage than is necessary to cool inflation. In recent weeks, the Fed Funds futures have started to price in a lower year-end target for the Fed Funds rate. The current rate is 1.75%, up from 0.00% at the beginning of the year. According to Tom Lee of FSI insight, the year-end target has “tanked, and is now pricing in a terminal rate of 3.3% at year-end, instead of 3.78% in just the past 3 weeks.”

It is important to breakdown what has occurred during the first half of 2022 in the equity markets. Up to this point, corporate earnings have not contracted at all. For the most part, companies have been able to pass along higher input costs to the consumer. So, the entire move down in stock prices has come by way of valuation compression. At the beginning of the year, the S&P 500 was trading at a lofty 21.2X forward earnings, and now just 6 months later it’s  trading at 16X forward earnings, below the 16.85X average of the past 25 years. It is now safe to say that the U.S. stock market is fairly valued to undervalued as long as earnings can hold tight and interest rates remain in their current range. Even if earnings slip by 5%, which would be a meaningful drop, forward price-to-earnings would be right at 16.85X, so really at this point, we feel that taming inflation is the key to equity market performance in the next few months. 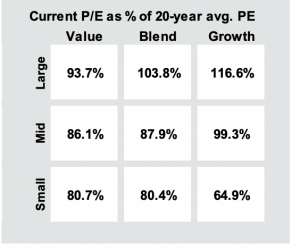 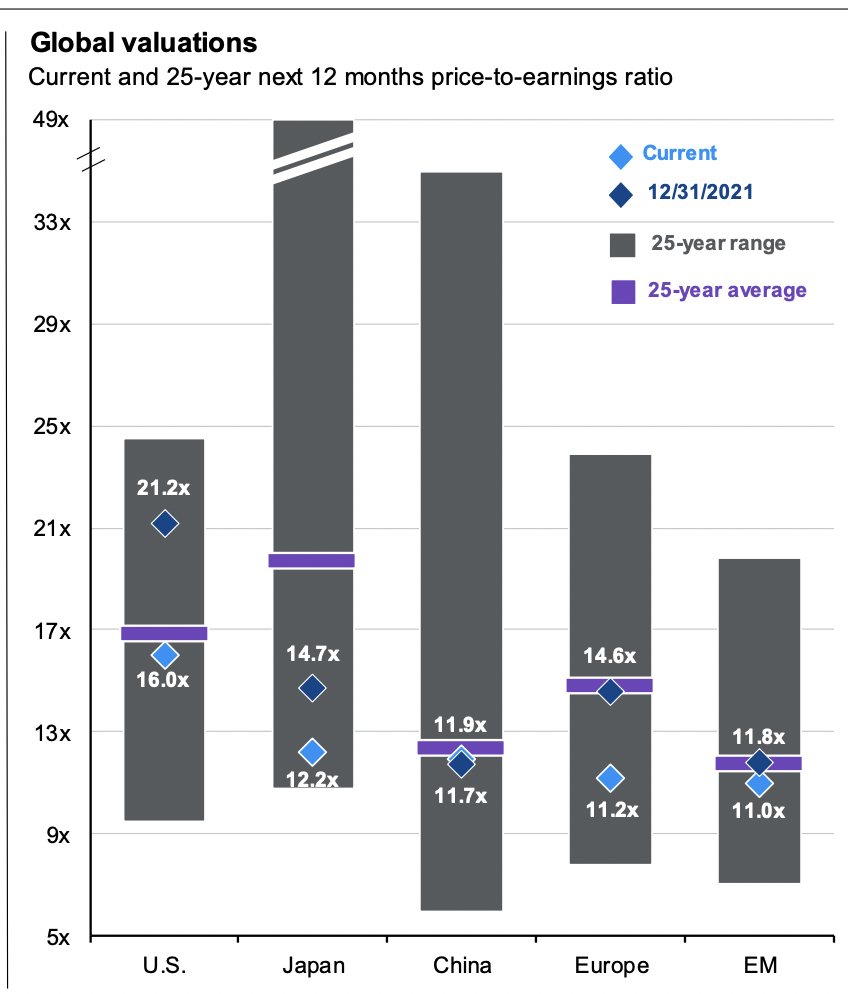 On a regional basis, foreign markets have slightly outperformed U.S. markets this year, even with the strongest dollar in decades. Overall, global valuations have become quite attractive, which will eventually give way to solid returns. Weak markets don’t last forever, and although the first half of 2022 has been frustrating, the latter part of the year could prove to be rewarding. There have been signs of inflation easing, which could prompt the Fed to ease up on the rate hikes. Some historical, optimistic statistics: The median return for the S&P 500 one year after a bear market is 24%. Additionally, the market has averaged 15% one year after a mid-term election cycle.

Negative stock market returns aside, the really sensational capital markets story thus far in 2022 is the bond market.  Deutsche Bank estimates that the first half of 2022 was the worst first half of a calendar year for the bond market since 1788! Are you noticing a theme here? There have been a lot of record setting performance metrics over the past few years, and they can all be attributed to the pandemic. We all look forward  to “normal” times once again. 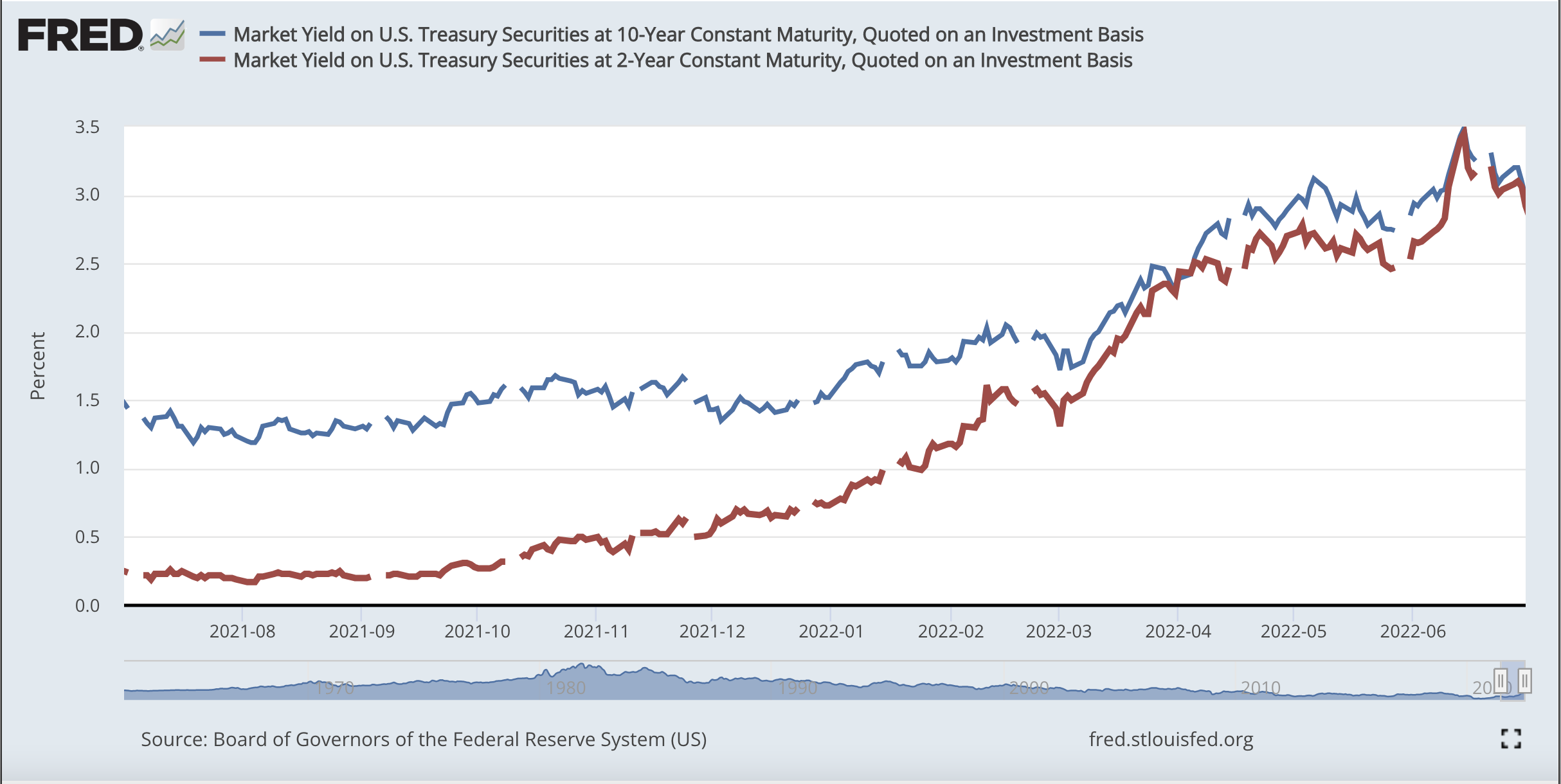 The violent drop in bond prices is the reaction to central banks’ policy and their rhetoric around raising rates to tame inflation. You can see from the chart on the top right, how the 2-year Treasury note rose from 0.20% to 3.5% in under a year. The 10-year Treasury also jumped from 1.5% to 3.5%. These rate moves are very significant and account for the recent decline in bond prices. The silver lining here is that bonds now look much more attractive from both a price and yield standpoint than they have in many years. Now that rates have moved up so quickly and the yield on the 2-year is at the same level as the rate of the 10-year, we remain overweighted toward the short end of the yield curve (3-5 year range). Additionally, our exposure to bonds is biased to corporate credit and municipals, as direct investments in Treasuries carry the most risk exposure to interest rate volatility. Finally, we remain committed to “non-traditional” liquid alternatives for their diversification benefits and lack of sensitivity to moves in rates. 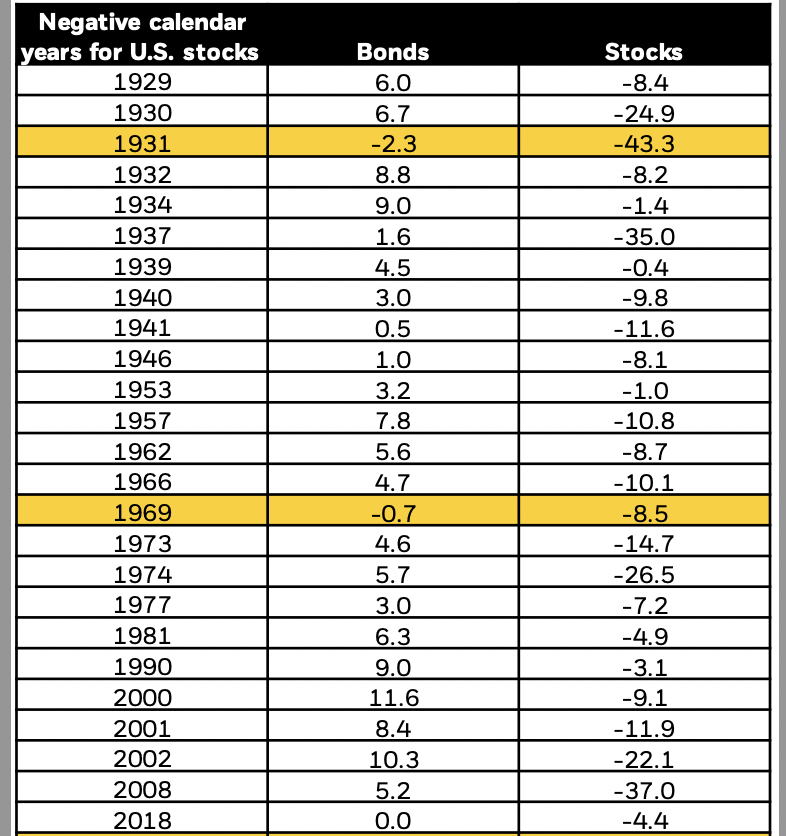 Going all the way back to 1929, there have been 25 years with negative stock market returns. Surprisingly, only 2 of those years delivered negative returns for bonds simultaneously.  It’s likely that 2022 will be the third; it’s also quite possible that both stocks and bonds deliver much better performance in the 2nd half of the year. We believe there is an asymmetric risk/return dynamic at current levels, meaning upside return potential is greater than down loss potential. The stock market has most likely already priced in a shallow recession, the bond market has priced in several more rate hikes by the Fed, valuations are beginning to look attractive, and the mid-term election cycle is five months away. As long term investors, there are plenty of reasons to be optimistic in the midst of all of the recent stresses.